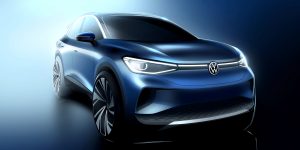 Production of the VW ID.4 has kicked-off at the Volkswagen plant in Zwickau, Saxony today. VW thus starts serially making the e-SUV before officially launching it at the end of September. Germany is just the start of the production cycle with plants in China and the US to follow closely.

The VW ID.4 as such is not news. However, details remain scarce with Volkswagen waiting to show the car given the pandemic restrictions on gathering officially. As reported in today’s newsletter, Automobilwoche suggests the launch set for 23 September.

Production, however, has kicked-off today at the Zwickau plant in Saxony. Board Member for E-mobility, Thomas Ulbrich, referred to “the major societal challenges of recent months,” thus considering the start of ID.4 series production “an exceptional achievement”. He stressed, “The second model in the ID. family is already rolling off the assembly line where, only recently, ICEs were still being built.”

Indeed Volkswagen has completed the turnaround of the Saxony plant this June, transforming a factory that built fossil-fuel-powered cars for 116 years into the first plant dedicated entirely to electric vehicles with investments running at around €1.2 billion. Volkswagen says they will complete all conversion work as scheduled this year. In 2021, VW aims for 300,000 electric vehicles based on the modular electric drive matrix (MEB) to leave the Zwickau plant.

The ID.4 shares the MEB platform with the ID.3, of course. Only in comparison, the front of the e-SUV is significantly higher and somewhat bulkier as is typical of SUV, but Volkswagen claims that this SUV design is “particularly aerodynamic”. “The outstanding aerodynamics reduce the drag coefficient, and it will boost the ID.4‘s range to up to 500 kilometres, depending on the drive package,” says Ralf Brandstätter, CEO of the Volkswagen brand. Since the ID.3 can actually travel up to 550 kilometres with the same 77-kWh battery – the 50-kilometre difference is still due to the higher weight and increased air resistance of the ID.4 SUV body. However, Brandstätter reasons that “With the ID.4, Volkswagen is adding an all-electric vehicle to its offering in the compact SUV class, the world’s largest growth segment.”

For VW to take the ID.4 global, Brandstätter explains: “Going forward, the car will be built and sold in Europe, in China, and later also in the USA.” Apart from Zwickau, the CEO is referring to the plants in Anting (China) and Chattanooga (USA). Pre-series production began in Anting in November 2019. In Chattanooga, the ID.4 should get serial in 2022. Volkswagen maintains that – as with ID.3 – the ID.4 production will be carbon-neutral.