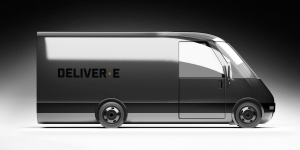 Bollinger Motors plans to make an all-electric delivery van starting in 2022. The electric vehicle start-up joins a growing market with manufacturers gearing up to bring commercial EVs to finally feed the demand from major delivery fleets.

Chief Executive Robert Bollinger said as much, tying the Deliver-E directly to companies seeking electric delivery vans. “Everyone knows there’s a lot of players in this electric delivery space.” Still, he believes “But the need for electric vehicles is much greater than anyone can produce at this point.”

This (almost belated) supply in the logistics market has been accelerated by policies requiring fleet operators and logistic companies to look into low carbon solutions if they want to continue to deliver in city centres or entire states. In June, California approved a groundbreaking policy making it obligatory for manufacturers to sell a rising number of zero-emission vehicles, starting in 2024. We talked about how to do that with a Hubject executive only last night.

At the same time, it has been new companies coming to meet the demand. At the same time, giants like Amazon have been turning to start-ups such as Rivian to build what their fleets require as reported. Also Britain’s Arrival is working to supply 10,000 electric vans to UPS as soon as possible.

For Bollinger Motors to make it in two years time, the Deliver-E van will employ the same major components as the rest of the company’s lineup. So these are motors, battery, inverters, and gearboxes, with all of them integrated into a new platform with a steel frame “created to address the specific needs of delivery vans.”

According to Bollinger Motors, they will engineer the Deliver-E platform, that hosts a front-wheel-drive, to fit classes 2B through to class 5. The van also has a low-load floor height of 457 mm and is designed to a 10-year durability target.

Add to this a selection of battery packs, including 70, 105, 140, 175, and 210 kWh. Variable wheelbase lengths will also be available to fit the various needs of fleet customers, basically depending on the route. Bollinger has yet to claim any data on the range.

The Michigan-based startup says it will work with a contract manufacturer to build the Deliver-E vans in the US starting from 2022. The company is also looking to launch the pick-up truck B2 and e-SUV B1 a year earlier as reported.