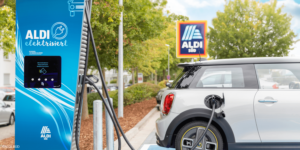 Supermarket chain Aldi Süd has announced the construction of a further 1,500 charging stations in the parking lots of its stores. This would mean that more than 75 per cent of the discounter’s stores would have at least one charging point.

Before the end of this year, 200 stores are to receive a new charging station. Subsequently, around 300 charging stations are to be built and put into operation each year. At this rate, the announced expansion would be completed in 2024 or 2025.

The German Minister of Transport, Andreas Scheuer, gave the starting signal for the project with a symbolic first charging station in Passau. According to Aldi Süd, the project already started in July this year. With the branch in Landau in der Pfalz (Maximilianstraße) and in Cologne (Poller Kirchweg), there already seem to be the first locations with the High Power Chargers.

Aldi Süd will proceed according to a similar logic as before: fast charging points are to be set up primarily at branches located near freeways or in larger cities. Cheaper AC chargers are planned in rural areas and in smaller towns.

Charging is to be exclusively with green electricity. If it is possible on site, photovoltaic systems will also be installed on the roofs of the stores. The discounter does not provide any information on the investments in the charging infrastructure project.

Aldi Süd currently already operates around 100 free charging points in the store parking lots. By spring 2021, there should be charging stations at a total of 380 stores.

A company spokesperson told the magazine WirtschaftsWoche in August that the company was preparing “a customer-oriented development of charging facilities”. Further details of the Aldi Nord project have not yet been revealed.

aldi-sued.de, wiwo.de (both in German)