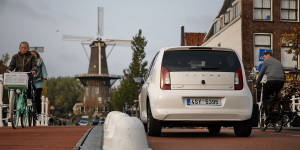 The Škoda Citigo-e iV has sold out and is now being permanently taken out of circulation, just as its combustion engine counterpart was last year. VW has also imposed a temporary order stop for the e-Up in Germany, also due to high demand. In the UK, however, the VW e-Up is still configurable.

While the order stop for the VW e-Up in Germany is officially only temporary, Volkswagen’s Czech subsidiary Škoda has stopped making the Citigo e iV altogether. While the electric vehicle proved popular in the UK, Sales and Marketing Director Alain Favey told Autocar: “Citigo is gone – as far as Europe is concerned we are sold out. There will not be a replacement of the Citigo and we have no intention to have a car of this size in the future”. So it stands to reason that the Seat Mii electric is also on the horizon, even if this has not yet been confirmed.

Now VW looks to be heading the same route. “Due to the sharp increase in demand for e-vehicles, we have decided to adjust our offer in Germany and temporarily remove the small car e-Up! with current delivery times of 16 months from our order offer,” a spokesperson confirmed to electrive. “In the interests of our customers, we are instead focusing on quickly available e-vehicles.” The speaker referred to the ID.3 and various PHEV models.

The sales stop has already become apparent. In an interview with the specialist German publication kfz-betrieb, VW Sales Director Jürgen Stackmann stated that the e-Up received the most orders of all models in Germany. “It was almost as if all those interested in the e-Up pressed the order button at the same time,” Stackmann said. In July, the company sold more e-Ups than had over the previous nine months.

In view of the delivery time of 16 months – i.e. approximately until the beginning of 2022 – it is questionable whether the e-Up will ever be sold again. In 2023, Volkwagen will probably launch a new small electric car based on a shortened MEB. By then the plan is to make the ID.1 available. However, there have already been reports that the ID.1 could be delayed by two years and will not come onto the market until 2025, in which case the production pause would be long and VW could offer the e-Up for a little longer.


In Germany, the e-Up with 16 per cent value-added tax still costs 21,421.01 euros. With the German environmental bonus plus the innovation premium  9,480 euro fall off the price, brings the final customer price to 11,941 euros – or accordingly low leasing rates.

The attractive price also applies to the sister models Seat Mii electric and Škoda Citigo e iV, they are even a few euros cheaper than the VW. While there is official talk at Volkswagen headquarters in Wolfsburg of a temporary order freeze, in the case of the Škoda the sales stop seems to be a permanent one. In an interview with Autocar, Sales and Marketing Director Alain Favey said that the manufacturer wanted to concentrate on larger models. “The Citigo is gone – as far as Europe is concerned, we are sold out,” said Favey. “There will not be a replacement of the Citigo and we have no intention to have a car of this size in the future”.

A spokesman for Škoda Germany also confirmed the end of the car to electrive. “As Škoda’s first battery-electric vehicle, the Citigo e iV has generated a great deal of customer interest and many orders from our Škoda partners,” the spokesperson said. “As a result, the existing production capacities are now exhausted and the model can no longer be ordered.” The Citigo including the electric version is already no longer listed on the homepage of Škoda in Germany.

At Volkswagen’s Spanish subsidiary Seat, the Mii electric is still listed on the homepage in Germany, but cannot be ordered or configured. In the UK, the vehicle can be configured but test drives are not available. “Seat’s first all-electric vehicle has generated very high demand and will therefore no longer be available for 2020,” it says in a note. “For this reason, the Seat Mii electric can no longer be ordered ex-works. The vehicle is expected to be available again from 2021”. In an interview with electrive, a spokesperson from Seat Germany repeated that the Mii electric is expected to be available again from 2021.

Even without the innovation premium, demand for the VW triplets had already exceeded supply. In the first three months of the year alone, the e-Up was ordered 20,000 times – as a VW spokesperson told the editorial team in April, this was already the planned quantity for 2020. The Seat Mii electric was already sold out for 2020 at that time, but the Škoda was still available for order at that time – albeit with a delivery deadline until early 2021 in some cases.

With reporting by Sebastian Schaal and Daniel Bönninghausen.

BMW may be planning electric 3 Series