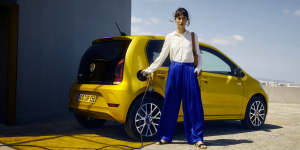 The new version of the Volkswagen e-Up is now on sale in the UK with a bigger battery and a starting price of £19,695, including the £3500 plug-in car grant.

The carmaker claims the upgraded battery is capable of charging at 40kW, taking an hour to charge to 80 per cent, just as with the old version. The range is given at 159 miles (255 km) in WLTP figures, up from the previous 83 miles. Since the e-Up shares the technology with the already introduced sister models Skoda Citigo e iV and Seat Mii electric, the e-Up too takes over their 7.2 kW onboard chargers (instead of the previous 3.6 kW).

The power of the electric motor remains at 61 kW and the top speed also remains the same at 81 mph (130 kph). Nevertheless, VW assumes that the sales volume will “increase significantly”.  How this will figure in the UK remains vague. Tim O’Donovan, EV Product Marketing Manager at Volkswagen UK, said: “We are very pleased to have secured limited stock in the UK”.

The small model also forbodes the ID.3’s arrival on British shores this summer, which will be the first electric car based on the MEB platform to go on sale in the UK. Volkswagen said the First Edition will be available to 40,000 pre-orderers throughout Europe from summer (if they make a binding order from their reservation). Deliveries of the series versions with 58 kWh and 45 kWh batteries will start in September and October respectively as reported.