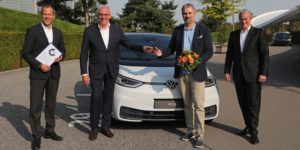 The first VW ID.3 has been delivered in Germany as Volkswagen hands over the 1st Edition model made in its ‘Transparent Factory’ in Dresden. The first customer was handed over a white ID.3.

As with all the vehicles delivered so far, the electric car is an Edition ID.3 1st featuring a 58kWh battery for a range of 420 kilometres, according to WLTP standard. First-time customer Oliver Nicolai described it as “a great feeling to be one of the first to drive this car”.

The regular ID.3 (the 1st Edition is, as is generally known, only intended for customers with pre-orders) currently starts at around 35,600 euros. The entry-level model Pure with the smallest battery for less than 30,000 euros should “be available for order in a few months,” according to a statement VW made in July.

On the occasion of the first hand-over, VW said that binding contracts had already concluded for more than 25,000 of the 30,000 units of the ID.3 1st. The brand said they have received over 7,000 orders from Germany and the Netherlands each, closely followed by Norway and Sweden.

After the first delivery in Dresden, customers at the Autostadt headquarters and other VW dealerships will also receive their electric vehicles on pre-order. According to Volkswagen, they scheduled 40 deliveries this weekend in Wolfsburg alone. Sales Director Jürgen Stackmann was on site, although this may be his last public appearance as VW will appoint his successor in October.

According to local media reports, Stackmann will be replaced at the end of September by Klaus Zellmer, who leads Porsche North America. Stackmann had held the post for five years, but 53-year-old Zellmer is to take over in October.

The German Handelsblatt had already suggested in July that Stackmann was on the verge of retirement. At the time, it was said that he had done too little for the distribution of the Golf 8 and Passat given the ID.3. According to another source, Stackmann is said to have given too much resistance. Because of the unsolved technical problems with the Golf 8, the head of sales is said to have “pleaded for a postponement concerning the list of defects” but was unsuccessful with this request. In another contentious issue, the racism reproaches in advertising feed into his area of responsibility – since he is also responsible for marketing and after-sales.

What Stackmann did well was to increase global sales. Stackmann has also introduced the agency model for the sales of the ID. family, which should enable VW to establish close customer contact.

With reporting from Sebastian Schaal, Germany.