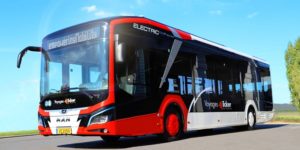 Voyages Ecker, a subsidiary of Voyages Emile Weber from Luxembourg, has taken delivery of the first four MAN Lion City Electric buses. The solo buses are pre-series models, which MAN sold to the Group under a partnership agreement concluded in 2017.

The four e-buses will primarily serve in the north of Luxembourg City, while as a whole, the small country wants to ban sales of diesel buses across the Grand Duchy from 2020.

MAN presented the series version of the Lion’s City Electric at Busworld in Brussels in October 2019. The 12-metre bus has 35 seats and can carry up to 88 passengers. The drive train delivers 160 kW to a maximum of 270 kW. MAN estimates the range at 200 to 270 kilometres from the modular batteries with 480 kWh installed capacity. Charging happens via CCS2 combo plugs at the depot.

Including the current delivery, the number of electric buses in the Voyages Emile Weber fleet will rise to 70 vehicles by the end of the year. The company already has Irizar and Mercedes-Benz e-buses. The delivery from Irizar included articulated models. From Mercedes, Voyages Emile Weber received the eCitaro model with two doors as reported.

The company’s entire fleet consists of over 600 vehicles – but as already mentioned, will see no further additions of combustion engines from now on. The operators will gradually convert the fleet with electric buses once the old vehicles reach the end of their service life. The Luxembourg bus network should then be completely emission-free by 2030.

ABB to switch to all-electric vehicle fleet in the UK