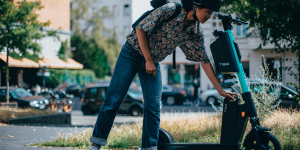 York joins the expanding ranks of UK cities running e-scooter trials and has selected Tier Mobility to run the sharing offer on its streets. The University of York will receive the first kick scooters in a few weeks.

The City of York Council that initiated the trial said discussions were taking place as to whether York Hospital would also be able to host the scheme. The initial run will see up to 100 e-scooters deployed, with more e-scooters and e-bikes to come.

The northeast English city selected Tier as the sole supplier for the Department for Transport-approved scheme. Small electric scooters were not permitted in the UK until the DfT moved forward and expanded planned kick scooter trials by a year as reported.

York had not been among the initially designated “future transport zones” but jumped on the new option to help shape new EPAC regulations. Tier’s bid won against 15 other applicants in what York called “a highly competitive tender process”.

The Council said the decision was down to the safety features offered by the machine from Tier, “including an integrated helmet, the largest front wheel in the market, a wider footplate, dual suspension, a double kick-stand and dual drum brakes for stable riding on uneven surfaces and conditions.”

Cllr Andy D’Agorne, the Executive Member for Transport at City of York Council, added: “The trial will also form part of the city’s Covid-19 response.” He also stressed that “Together we will ensure there are clear and effective channels of communication which are critically important to get early warning of any issues that need to be addressed, to assess the impact and to learn all the lessons from the trial.”

Apart from Tier, the Swedish Voi has had bidding success in the newly open UK market. Both companies recently introduced new e-scooter models. At the occasion, Tier presented not only swappable batteries but their combination with specially developed charging stations. The Berlin-based start-up names local companies such as cafés and grocery stores as the target group for the mobility concept (MaaS). The installation of charging stations would not incur any costs for the partners, according to the accompanying press release at the time.

Whether Tier will roll-out these latest models and concept in the York e-scooter trial is unclear at this stage. The company mentioned swappable batteries to the press.

Besides, the cooperation will likely be longer than the set year. When UK transport secretary Grant Shapps called for at least one city centre to be restricted exclusively to bikes and electric vehicles this May, councillors were calling for York to bid to become the first such zero-emission city.