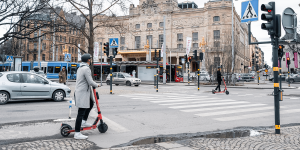 The UK Government has fast-tracked trials of electric kick-scooters as part of a £2 billion investment in green travel solutions. The trials will now start next month – a year earlier than planned.

Just a few weeks ago in March, we reported that the UK government was in discussions to legalise electric kick-scooters that have been banned on British streets. The trials proposed by the Department for Transport in four future transport zones were to trial future regulation. This week, however, the UK Transport Secretary Grant Shapps revealed a comprehensive plan to increase micromobility, cycling and walking in the light of the Covid-19 crisis, speeding up the e-kick-scooter trial process by a year.

In a press speech delivered from Downing Street Shapps announced the £2 billion investment in sustainable transport: “Today I’m also fast-tracking trials of e-scooters, bringing this programme, already underway, forward from next year, to next month.” He said that this means “extending those trials from four local authorities to every region in the country that wants them in a bid to get e-scooter rental schemes up-and-running in our cities.” This is to happen “as fast as possible” to help reduce car use on shorter journeys, and taking some pressure off buses, “at this vital time.”


This is a big turnaround for the British Isles. The UK was taking a notably different stance to continental Europe on the issue of micro-mobility where European capitals have long since introduced the light electric vehicles and already been through the inevitable trials and tribulations necessary to initiate usage that was acceptable for other street users and residents.

The planned trials are meant to ensure that electric kick-scooters are safe for use on roads. The tests will be looking at a minimum age, vehicle standards and insurance requirements, among other things. The planned review will look at whether local authorities should have extra powers to manage the impacts of e-scooters on public space, such as where they can be parked – one of the most contentious issues with kick-scooters.

At any rate, now being last kid on the block when it comes the electric kick-scooters should enable the UK government to learn from cities in continental Europe or North America, where these issues have been contentious and eventually found workable solutions. Earlier this year, Montreal trialled electric kick-scooters and decided against them.

The new approach from the UK government now means that rental kick-scooters could hit UK streets as early as June.