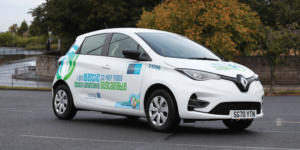 Renault will deliver 141 units of its electric model Zoe to South Lanarkshire Council in Scotland. With 104 of the vehicles, the Council’s pool vehicle fleet will be converted from diesel to electric. The remaining 37 Renault Zoe will be used for a range of community services.

This is the French manufacturer’s largest order for electric cars from Scotland to date. Renault says that the deliveries are now underway, which will bring the amount of Renault vehicles on the Council’s entire fleet to 391.

The employees of the authority use the pool vehicles for trips to the 20 localities in the administrative area. The Renault Zoe can be charged on-site at the Council’s headquarters. The Council aims to expand the existing number of charging points across South Lanarkshire Council’s estate.

Scotland has contributed to the financing of the new chargers via the government organisation Transport Scotland with a grant of over 1 million pounds (almost 1.1 million euros) from the Switched-on-Fleets program. Scotland’s Minister of Transport Michael Matheson says that the country has set itself the ambitious goal of gradually reducing the demand for new gasoline and diesel cars and trucks. Scotland is currently aiming for a phase-out of combustion engine sales by 2032.

According to Matheson, the public sector must take a pioneering role in the transition to emission-free vehicles. That’s why last year we outlined an earlier target – phasing out the need for all new petrol and diesel cars from the public sector fleet by 2025.”