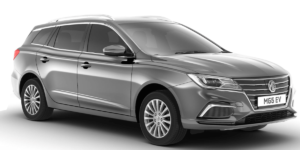 The UK-based manufacturer MG Motor announced the official sales launch for the MG5 EV and the MG HS Plug-in hybrid in the UK. The MG5 will retail for £24,495 after the plug-in car grant, while the MG HS will launch at £29,995 OTR.

Earlier this month, the company revealed the purely electric MG5 EV’s combined range of 214 miles (344 km) while the city range should reach 276 miles (444 km) for a combined driving efficiency of 3.6 miles/kWh (17.5 kWh/100km). At the time, MG had yet to confirm final specifications for the battery size, which was estimated to stand around 52.5 kWh, based on MG’s claimed WLTP data. At the time,

Now the British company has confirmed that the 115kW electric motor is powered by 52.5kWh Lithium-Ion battery pack. Charging time from 0-80% can be completed in 50 minutes with a CCS rapid charger. The above-mentioned range data has also been confirmed for the fully electric car.

In January 2019 MG Motor hinted at a 73 kWh battery and a theoretical range of 500 km, but this version clearly did not make it to serial production.

The plug-in hybrid version will apparently not retail until October, which means that fans of the plug-in hybrid SUV will have to be a little more patient. It combines a 1.5-litre turbocharged engine with a 90kW electric motor to provide a purely electric range of 32 miles, which the manufacturer says should suffice for most commutes. The motor also allows for acceleration of 0-60 mph (0.100 kph) in 6.9 seconds. With a Type 2 fast charger, the MG HS Plug-in can be charged from 0 to 100% in three hours.

MG also added a peculiar and somewhat misleading byline about their PHEV: “But in hybrid mode, the range of the car is limitless,” apparently attempting to win over those who are still daunted by range anxiety. However, given the UK’s political stance on electrification, as well as the various grid infrastructure projects currently underway, this does seem an odd line to market.

The company also added that this coming year will mark a major milestone for their electrification strategy: “2021 will be MG’s tipping point, with over 50% of volume expected to be plug-in.”