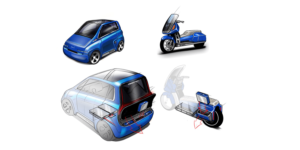 The Dutch company Cleantron has presented a modular battery system for light electric vehicles (LEV) such as electric scooters and microcars. The system combines a permanently installed lithium-ion battery with compact, portable Li-ion batteries and a DC/DC converter.

Cleantron is a manufacturer of portable 48V lithium-ion batteries. Based on this, the Dutch have now developed the battery system called High Power Multipack Configuration (HP MPC), which consists of a portable part with several connectable batteries of 2 to 2.5 kWh each, a non-portable base battery with a capacity between 1 and 60 kWh and said unidirectional DC/DC converter in 48/48 V, 48/100 V or 48/400 V versions. One could say that the company has made the battery system half interchangeable, mainly to achieve weight advantages. The Dutch describe conventional replaceable batteries as “often difficult and cumbersome to handle”.

According to Cleantron, the three components of the HP MPC mentioned above work together intelligently, i.e. the converter ensures that the permanently installed battery is continuously charged – via a constant, low discharge current from the portable batteries. The latter are connected in parallel by the manufacturer’s existing MPC system.

The MPC system determines which battery is activated based on the charge status of the portable batteries. In principle, any number of batteries can be connected. The company described the system to us in an e-mail. Each battery has a relatively low weight of ten kilograms.

Portability, especially in the sharing market that is beginning to look into swappable battery systems, such a stock of full batteries that can be quickly exchanged for empty ones is an obvious business model.

While the portable Cleantron batteries are standardized, the fixed battery and converter can be configured depending on the vehicle requirements. For example, a low-voltage or high-voltage battery with variable cell chemistry (mainly LFP and LTO for low voltage and NMC and NCA for high voltage) is available. The capacity can be selected between 1 and 60 kWh. The converter is available in the above-mentioned versions.

Based on this selection, Cleantron believes it is able to “configure the optimum battery for each vehicle, taking into account factors such as cost, performance and service life”. According to the company, the system is particularly suitable for micro-mobility applications, urban distribution vehicles, cabs and minibuses, as well as for maritime applications such as dinghies, water cabs and motor yachts.

Info via email with additional reporting by Cora Werwitzke.