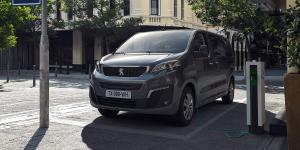 In the UK, Peugeot has opened the order books for the e-Traveller all-electric passenger van. The e-Traveller should arrive in British showrooms in 2021. Customers can reserve a vehicle with a single, fully-refundable deposit of £250.

In June this year, Peugeot announced that it was electrifying its Traveller passenger van. The van with up to nine seats is largely identical in construction to the new Opel Zafira Life, for which an electric version has also been announced for early 2021.

The new e-Traveller sports a 50 kWh battery and a 100kW (136hp) electric motor. From a single charge, the e-Traveller should have a range of up to 143-miles (around 230 km), according to WLTP. The battery is guaranteed with an eight-year, 100,000-mile warranty.

The e-Traveller is capable of rapid charging with up to 100kW, with which an 80% charge will take 30 minutes. Peugeot UK is offering all customers a free six-month subscription to the Polar network that includes 7,000 public charging points.

Two body lengths are possible, Standard and Long, and the e-Traveller’s modular configuration can accommodate up to eight passengers comfortably, says Peugeot. The e-Traveller has a boot capacity of up to 1,500 litres.

Prices for the fully electric passenger van have not yet been released.