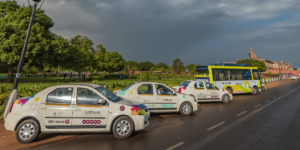 Ride-hailing operator Uber announced a new partnership with Lithium Urban Technologies, that is among India’s largest electric vehicle fleet operators. They will deploy over 1,000 electric vehicles for Uber India’s Rentals and Premier services over the coming months.

The roll-out focusses on the cities of Delhi, Mumbai, Bangalore, Hyderabad and Pune. It is the second such announcement from Uber in quick succession since the company pledged to green its global operations by 2040.

In India, Uber says their drivers are running 100 electric vehicles such as Mahindra eVerito and Tata Tigor EV on its platforms.

The partnership with Lithium Urban Technologies will increase this number ten-fold. For Uber India, it simply means integrating Lithium’s fleet and drivers into their services via the app. It is unclear whether users will have the option to select a zero-emission ride specifically.

Lithium claims that it runs more than 1,000 electric sedans, hatchbacks, SUVs, and buses across ten cities in India as well as its own infrastructure of over 500 fast and slow chargers, and charging hubs.

Over the next 12 months, Uber remains “committed to scaling up to 2,000 electric vehicles on its platform, including the Lithium EVs”. The collaboration follows similar deals Uber India made with Yulu, Mahindra and SUN Mobility.


Also in Europe, Uber has been seen looking to facilitate the private drivers a switch to electric transport. The company joined forces with Volkswagen earlier this autumn to launch an electric vehicle pilot through the Uber Green ride-hailing service in Berlin in September.

VW and Uber aim to put several year-old e-Golf vehicles into use across the German capital. Rather than integrating an existing electric cab service into their app like in India, an Uber spokesperson told electrive, that the deal would give Uber drivers access to cheaper, pre-used electric cars. He also mentioned advantageous conditions but added these were subject to the state of each vehicle.

In the USA, Canada and Europe, Uber targets zero-emission operation by 2030. The corresponding Uber Green has already launched in more than 15 US and Canadian cities and some European capitals.

How many electric cars are in operation in Uber Green is unclear at this stage as Uber does not register all vehicles by drive type yet. The spokesperson also pointed out that Uber Green includes hybrid cars in many cities.

Other partnerships with carmakers include General Motors for the US and Canada and the Renault-Nissan alliance in Europe to cover cities in the UK, France, the Netherlands and Portugal. In London, Uber recently ordered 2,000 Leaf electric vehicles, also in a move to appease the city that is considering banning the ride-hailer.