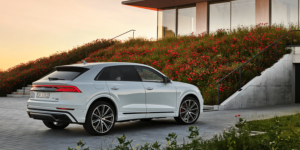 Audi is now also presenting the Q8 with plug-in hybrid drive, making it the seventh PHEV model to be launched since mid-2019. They offer the Q8 as a PHEV with an electric motor in two power levels.

The Q8 basically adopts the part-electric drives that Audi already offers in the Q7 but with slightly different technical data. The Q8 55 TFSI e quattro comes with 280 kW (381 PS) system power and up to 47 kilometers electric range according to WLTP. The Q7 has a maximum range of 43 kilometers.

The more powerful Q8 60 TFSI e quattro achieves 340 kW (462 PS) system power and can be driven up to 45 kilometers purely electrically using the WLTP measuring method. In Q7, the system output of this version is only 335 kW. The drive itself is also used in the Porsche Cayenne and Cayenne Coupé, as well as in the VW Touareg R. The 280 kW version is not available from Porsche and is offered by VW as a Touareg eHybrid.

All of the large SUV models rely on the 3.0 liter V6 gasoline engine. This produces 250 kW of power and 450 Nm of torque, and the exhaust gases are cleaned by a gasoline particle filter, among other things. The differences are exclusively due to the design of the electric motor with 100 kW output.

The battery is installed under the trunk and has a maximum energy content of 17.8 kWh. This is 0.5 kWh more than the battery with which the Q7 TFSI e quattro 2019 went on sale. The Q7 will now also be fitted with the newer battery, which is also 40 kilograms lighter.

VW Touareg to be offered in two PHEV editions