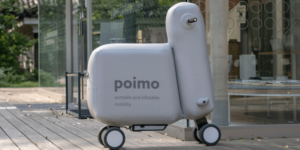 After news about an inflatable electric scooter made the rounds from Japan last year, the project has continued development, showcasing even more advantages from such unusual materials. The makers of the ‘Poimo’ have announced they found a way to create individualised inflatable electric vehicles in many different shapes.

The idea is simple: as the vehicle is inflatable and can change shape as such, why not adjust the final shape to the rider? Potential owners can submit pictures of themselves in their ideal sitting position.  The team then creates a 3D computer model of the vehicle with the desired driving position and specifications and could later produce the individualised vehicle, which could be an e-bike, scooter or even a wheelchair – provided the project makes it into the commercialisation phase.
digitaltrends.com, poimo.akg

Copenhagen to put an end to free-floating e-scooters