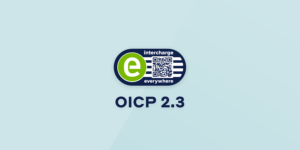 Hubject has released the latest version 2.3 of the Open InterCharge Protocol (OICP). Partners of the roaming network ‘intercharge’ can now start the implementation. Via API interface the protocol connects 250,000 charging points and more than 750 companies in 43 countries.

Hubject made its Open InterCharge Protocol open source in May 2019 to facilitate connectivity with its popular roaming platform. Together with network partners, the Berlin-based company has now further developed the OICP. Version 2.3 can be downloaded via the link below. In return, Hubject will discontinue version 2.1 in summer 2021.

New functions have been integrated into the new version in four main areas. As key words, Hubject calls the improvement of the POI quality, the realization of the calibration law compatibility, more transparency with different loading scenarios and the improvement of the data processing performance. Especially for CPO (Charge Point Operators), Hubject has also integrated a series of so-called remote test functions to test complex use cases.

“With this process, we and the entire industry have together taken an important step towards an open, broad-based protocol, which is the most widely used eRoaming protocol in Europe and other markets,” said Carsten Puhl, CTO of Hubject. Based on the open-source status, we want to encourage other companies and stakeholders to participate in the development.

Meanwhile, the intercharge roaming network is growing steadily. Just earlier this month, Hubject announced that the 252 quick-charging stations of the EU project NEXT-E would be connected to the platform. These are 222 fast chargers with 50 kW and 30 HPC stations with 150 to 350 kW charging capacity in Croatia, Czech Republic, Slovakia, Hungary, Slovenia and Romania. In the summer, the mineral oil company Aral also announced that it intends to set up more than 100 fast loading points at its German filling stations within twelve months and also connect these to the intercharge network.

Iberdrola and Volvo team up for Recharge in Spain

SAE introduces standard for wireless charging up to 11 kW