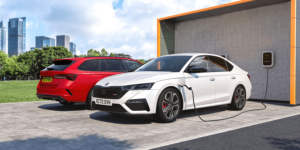 The plug-in hybrid version of Škoda’s sporty Octavia vRS will be available to order in the UK from 3 November. The Czech hybrid vehicle will start with a price of £35,020.

Škoda made the announcement on Twitter, after originally announcing the plug-in hybrid variant of the popular Octavia model last March. The Octavia vRS will launch with two versions, starting at different prices: £35,020 for the hatchback and £36,220 for the estate.

All-new Octavia vRS iV will be available to order from 3rd November and starts from £35,020.
The first SKODA vRS to be offered with plug-in drivetrain. Power output tops out at 245PS and max torque output is 400Nm – 30Nm more that the previous model https://t.co/86lE1WcdbQ pic.twitter.com/lJsA3eq7pk

This is the stronger of the two PHEV variants that the VW Group offers in its current MQB models. As in the Golf 8 GTE, the system output is 180 kW, which results from the combination of the 1.4-litre TSI petrol engine with 110 kW (150 PS) and an 85 kW electric motor.

The 13 kWh battery provides a purely electric range of up to 39 miles in the WLTP cycle and can be fully charged in 3.5 hours at a 3.6 kW charger. With a domestic three-pin 2.3 kW power source, the battery takes five hours to fully charge.

Furthermore, the automaker announced at their presentation in March, that for the standard Octavia, Škoda will also be offering two mild-hybrid versions under the name e-TEC later this year, in addition to the well-known plug-in hybrid with 150 kW (204 hp) system output.

The Czech subsidiary is thus following a similar path as their Spanish sister brand Seat in their compact model. The 150 kW PHEV is offered as Seat Leon, the 180 kW version under the sub-brand Cupra as Cupra Leon.

While the manufacturer has not announced when deliveries will begin, the UK plays an important role for Škoda, as it is the second-largest market in the world for the vRS, which accounts for 20% of all Octavias sold.