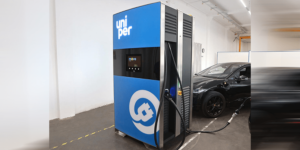 Uniper plans to install more than 1,300 mobile rapid charging stations in Germany by the end of 2024. Against this background, vehicle and drive specialist FEV is working with the energy company to develop the concept of a mobile rapid charging solution – from the initial idea to the current proof of concept.

With a footprint of 1.2 × 1.25 meters and a height of 2.5 meters, the system is compact and can deliver electricity completely autonomously. It has a useful capacity of 150 kWh and a charging capacity of 75 kW, from which two vehicles can benefit in parallel via two connections – CCS and CHAdeMO. FEV has integrated a cooling system to regulate the temperature during charging. According to the technology service provider, the system layout is designed for high charging currents and guarantees safe operation even under extreme weather conditions.

FEV claims to have used components from several partner companies for the prototype. The company has succeeded in installing a reliable micro-network, “even though independent, non-harmonized components from various sources are used”. In addition, the still nameless charging solution is networked in such a way that the station can be monitored and operations controlled remotely. For this purpose, FEV has developed a complex operations management system according to its own information.


Uniper has the concept of “Infrastructure as a Service” (IaaS) in mind as its business model. According to this concept, the station is replaced by a new one as soon as its batteries run out. The processes involved in recharging and replacing the batteries would be handled by a dedicated power supply and logistics network with 100 per cent CO2 emission-free energy, according to a press release. The mobile stations are charged at a special charging hub.

According to FEV, the developed prototype has provided proof of concept and now enables Uniper to position itself as a provider of “Infrastructure as a Service” services. In February of this year, Uniper announced that it intends to set up more than 1,300 mobile rapid-charging stations in Germany by the end of 2024 – specifically in regions such as Berlin, Munich and the Ruhr area.

At the beginning of the year, the project managers explained in an interview that they not only wanted to charge the mobile rapid chargers at central hubs, but also to provide network services there. The goal is to be able to implement the charging points “comparable in size to a telephone booth” in less than 24 hours throughout Europe. As a customer, the supplier has municipal utilities, gas stations, supermarket or restaurant chains in mind, but also sees potential at events and presentations of electric cars including test drives.

We also know mobile charging stations with battery storage from VW. At the beginning of the year, for example, the German automaker distributed flexible quick-charging stations throughout the Wolfsburg city area, which can be used by all electric car drivers free of charge for 80 weeks. Some of the charging columns are to be used at major events.

Tesla plans V4-Supercharger with up to 350 kW