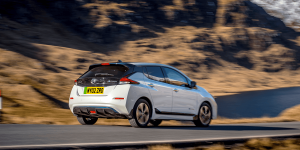 Nissan UK has announced the start of production of the new Leaf model year on 16 November. Among other things, a new 62 kWh entry-level model and lower prices for the e+ Tekna will be available in the UK. The expectation is that similar changes to the Nissan Leaf will soon be introduced in mainland Europe.

The top-of-the-range Tekna with its large ‘e+’ battery still costs 34,710 pounds, 1,685 pounds less than before. This represents a price reduction of around 4.6 per cent. The prices for the N-TEC equipment (only with 62 kWh battery) and the two Acenta and N-Connecta equipment for the 40 kWh version have not changed. The Tekna equipment with the 40 kWh battery has become 315 pounds cheaper.

New to the UK range, however, is the N-Connecta equipment line for the Leaf e+ with the large 62 kWh battery. At 32,695 pounds, it is lower than the N-TEC and Tekna models and, according to Nissan, should “improve access to the Leaf with a longer range”.

The changes in the UK cannot be transferred 1:1 to mainland markets, as the respective national companies can put together their range of equipment lines individually but such a price reduction for the top model can also have an impact on other countries. In Germany, for example, the Leaf 40 kWh is also offered as the basic “Visia Option” model (including a 3.6 kW AC charger instead of the 6.6 kW charger), which is not offered by Nissan UK.

were raised by Ballard Power Systems through a capital increase.