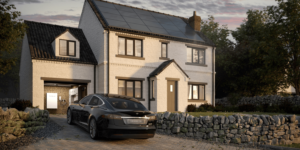 Rumours about Tesla’s plans to offer its own electricity tariffs have been circulating for several months. This plan is now moving forward in Great Britain where homeowners with an installed solar system and Tesla Powerwall can now become part of the Tesla Energy Plan.

On its website, Tesla advertises the Tesla Energy Plan as the lowest flat-rate electricity tariffs in Great Britain and that customers can save up to 75 per cent of their electricity bill. Anyone who chooses the offer will become part of Tesla’s virtual power plant in the UK. This means that the Tesla Powerwall in the home, i.e. the electricity storage facility for the temporary storage of locally generated solar electricity, will then be managed by Tesla and connected to other households in order to draw, store or feed electricity back into the grid as required. A basic capacity of 20 per cent is always maintained in the powerwall in the home if desired.

The virtual power plant is being implemented in cooperation with Octopus Energy, a utility known as a vehicle-to-grid specialist, which is responsible for the entire customer service and guarantees the supply of green electricity even when the sun is not shining. Both partners say that the above-mentioned prices are the lowest purchase and highest sales tariff in Great Britain. The export remuneration is 100 percent higher than the rate paid by other British energy suppliers. The highest remuneration to date is 5.6 pence per kilowatt hour from Social Energy suppliers, according to various media. Octopus Energy itself offers 5.5 pence in its portfolio.


According to British media outlets, Tesla launched its ‘Tesla Energy Plan’ program in the United Kingdom in August following an upstream test phase. Initially, however, a Tesla vehicle in the household was apparently a prerequisite for participation. Earlier this week, the Californian company opened the offer to customers without an electric car.

In terms of the potential savings Tesla cites, the statement that customers can save up to 75 per cent of their electricity bill with the Tesla Energy Plan refers to a comparison with the top six energy providers (“Big Six”) in the UK and electricity consumption of 8,000 kWh per year. The website Teslamag notes, however, that the calculation is based on households with Tesla but without a solar roof, which is not at all suitable for the offer according to the conditions – after all, the powerwall is primarily intended to temporarily store the solar power generated by the home.

The website also writes that according to their findings, the Tesla export tariff does not appear to be a construct comparable to the German feed-in tariff, but rather a network-internal price: In its FAQ, Tesla distinguishes between “exports” (i.e. probably into the virtual network together with the other customers) on the one hand and feed-in (into the general network) on the other.

In the shadow of electric car production, Tesla has been working on becoming a decentralised energy provider for some time now. Through access to power walls, Tesla megapacks (i.e. large stationary energy storage units with a capacity of up to 3 MWh, which are primarily designed for use by utility companies) and, in the future, the batteries of the connected Tesla vehicles, the Californian company will have a virtual power plant with which they can offer or purchase considerable amounts of electricity.

The market launch in Great Britain naturally encourages speculation that the Tesla Energy Plan will also be introduced in other European countries in the future. According to Teslamag, German Tesla customers were already asked in August to articulate their interest in a similar-sounding electricity offer in a survey.