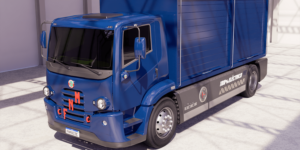 Brazil’s Fábrica Nacional de Motores (FNM) has been reborn with electric trucks powered by batteries from Northern California’s Octillion Power Systems. The collaboration will produce Class 6 and Class 8 trucks as well as buses and tractors.

Octillion has now been announced as FNM’s official battery supplier after a successful run of supplying the Brazilian company’s prototypes. The two companies say that Octillion will open a local battery factory inside FNM’s facility. This will lower manufacturing and logistics costs.

The Brazilian vehicle maker has had a checkered past going back to 1942 and was recently reborn with investors that include the brothers Zeca and Alberto Martins. In terms of family traditions, the Martins brothers are the sons of José Antonio Fernandes Martins, who was an executive and shareholder of Marcopolo for 53 years, the world’s second-largest motorcoach builder. The brothers are partners in the holding company that owns FNM and just opened the company’s new factory in Caxias do Sul city.

The collaboration between battery makers and the vehicle manufacturer will produce the FNM model 832, the Class 6 truck with up to 14-ton capacity, and the FNM model 833, the Class 8 truck with an 18-ton capacity, as well as buses and tractors in the company’s next steps. Fittingly, considering Brazil’s spread out population, the Octillion battery in FNM trucks supports a range up to 300 km for urban deliveries.

Zeca Martins talked about the significance the relaunch of FNM trucks will have on the country by explaining that the company’s strength lies in its ability to think differently since other truck manufacturers that operate in Brazil are “‘locked in’ to diesel.” He described that company’s ambition to deliver “clean, safe, silent connected logistics, signifying our client’s real green economy.”

In terms of the company’s business strategy, Martins explained: “We do not operate with dealerships, our business model is based on pre-sales contracts B2B, with trucks or buses produced under BTO (Build To Order) and with an ‘open spreadsheet’, which reveals all of our costs and profit margins to our clients. The FNM company is anything but normal.”

greencarcongress.com and information provided by email