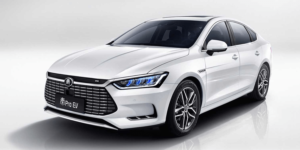 The company has generated 105.022 billion yuan (around €13.5Bn) since the beginning of the year, which represents an increase of 11.94 per cent over the previous year. Net profit for the first nine months also rose by 116.83 per cent to 3.414 billion yuan (around €440Mn). It can be seen that the third quarter in particular contributed to this very positive interim result in Corona times.

A key factor is the sales figures: for 15 months, BYD recorded a month-on-month decline in sales of plug-in vehicles compared to the same month last year. In September, the Chinese manufacturer stopped this negative trend – and for the first time ever sold more electric vehicles and plug-in hybrids than in the same month in 2019.

Specifically, BYD sold 19,881 plug-in vehicles (including commercial vehicles) in September, representing a 45 per cent increase over the previous year. In terms of BYD’s total vehicle sales, electric vehicles and plug-in hybrids accounted for 45 per cent in September.

According to Gasgoo, the manufacturer is forecasting net profits of between 4.2 and 4.6 billion yuan, or the equivalent of 540 and 590 million euros, for the full year 2020. This would correspond to an increase of 160 to 185 per cent compared to 2019. For the fourth quarter, the Group therefore expects a lower increase than in the third quarter: 0.79 to 1.19 billion yuan, or 100 to 150 million euros.

Meanwhile, BYD recently announced that it is working on a new platform for next-generation electric cars. Thanks to the new platform, BEV production will cost less. In addition, the manufacturer says the electric cars should offer a similar range as combustion engines. The first model based on the new BYD platform will be presented at Auto China 2021.

Nissan to stop selling ICEs in China by 2025