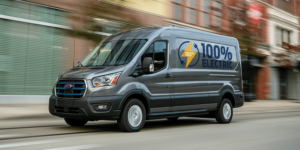 Ford has presented the electric version of its Transit van model scheduled to go on sale in late 2021. The base price in the USA is expected to be below 45,000 dollars. In Europe, the “electric workhorse” is scheduled to be launched in spring 2022.

Eight configurations are on offer, including three height and three length variants. Ford claims to have developed the 2022 model year e-Transit “with the knowledge gained from 30 million miles of customer telematics data” and is convinced that the production model will provide “the right range based on fleet requirements”. The US-American company says the electric van has a range of up to 126 miles, or 203 kilometres, for the low roof version. With the middle roof (more cargo space, but less-optimal aerodynamically) it is still 116 miles (187 kilometres), with the high roof 108 miles (174 kilometres).

In the German press-release, Ford speaks for Europe of an expected WLTP range of up to 350 kilometres. However, this figure is not yet final, as the model has not yet been homologated. In addition, the stricter EPA values from the USA usually give a better impression of what is possible in practice. While Ford has given prices of less than 45,000 dollars for the US model, Ford has not yet given a price for European models.

The cargo space holds between 246.7 (short wheelbase, low roof) and 487.3 cubic feet (long wheelbase, high roof) or, converted, between seven and 13.8 cubic meters. For Europe, the company speaks of up to 15.1 cubic meters. In total, there are five versions of the closed van: short/low, medium/low, medium/medium, medium/high and long/high. In the cargo area itself, the e-Transit is to offer the same attachment points and utility value as the combustion engine models.

When the e-Transit is scheduled for market launch at the end of 2021, a 67 kWh net battery will be installed in the electric commercial vehicle. The large van will be equipped with an electric motor that is unusually powerful for this segment: Ford gives the power at 198 kW and the torque at the equivalent of 430 Nm (original specification: 317 lb.-ft.). By comparison, a Mercedes e-Sprinter has an output of 85 kW, the VW e-Crafter 100 kW. In the e-Transit, the electric motor is also installed on the rear axle.

At a DC charging station, the e-Transit should be able to charge with a maximum of 115 kW, which means that electricity for 30 miles/48 kilometres should flow into the battery in ten minutes and enough to cover 45 miles/72 kilometres in 15 minutes. In view of these specifications, battery management does not appear to have to reduce the charging capacity in the first 15 minutes. It should take 34 minutes from 15 to 80 per cent, which corresponds to an average charging capacity of 77 kW.

The maximum AC charging power is 10.5 kW, which means that the e-transit on a Ford Connected Charge wallbox should be fully charged in eight hours. In the USA, the vehicle will be delivered from the factory with a Ford Mobile Charger so that the vehicle can be charged at 120 or 240 volts at the usual sockets there. Here the charging speed is 16 or 24 kilometres per hour.

The electricity from the HV storage system should not only be used for the drive. There will also be an optional Pro Power Onboard socket for North American customers. This should be able to deliver up to 2.4 kW of power for tools and equipment on construction sites. Ford cites a belt grinder or a circular saw as examples. For Europe, the power of the onboard generator is specified as 2.3 kW.

The US-American company wants to enable some connectivity services via an LTE module. Ford Commercial Solutions, for example, offers a telematics service optimised for electric vehicles or a fleet tool to optimise vehicle deployment. The electric van offers electro-specific services for the driver, such as pre-conditioning the vehicle via app, controlling the charging process, but also sending charging reports to the fleet manager.

Inside, the electric work van will have a twelve-inch touch screen with Ford’s own Sync-4 system. The navigation system is permanently connected to the cloud, for example for more accurate traffic data. Voice control will also benefit from the Internet connection. In addition, the Sync system is to be updatable “over the air” and thus always remain up-to-date.

The e-Transit will be equipped with dead-angle monitoring, a 360-degree camera (to prevent shunting accidents) and a reverse brake assist. A lane-keeping system and a collision warning system have also been installed, which also initiates emergency braking. With the optional “intelligent speed assistant,” the e-transit can not only recognise the currently permitted speed but also adjust its own speed accordingly. This function is probably activated (and deactivated) by the fleet manager, not the driver.
US prices to start below 45,000 dollars.

The e-transit for North America will be built in Kansas City, where Ford is investing 100 million euros in the conversion of the production facilities. The location of the plant is significant because Ford says that there are 13 specialised suppliers within a 45-kilometre radius of the plant that will fit the vehicles with the customer-specific bodies in the cargo area. The majority of the US transits sold last year went to such an equipment supplier before the customer took delivery of the vehicles, including leased vehicles.

For Europe, the e-Transit is to be built at the Ford Otosan plant in Kocaeli (Turkey). According to Ford, the assembly is to take place on a separate line. The same plant will also build the Transit Custom Plug-in Hybrid, which is already available.

“Ford is North America and Europe’s commercial truck and van leader, so the transition of fleet vehicles to zero emissions, especially for the fast-growing last-mile delivery segment, is critical to achieve our carbon neutrality goal by 2050,” said Jim Farley, Ford president and CEO. “Ford is ready to lead the charge, starting with the all-electric Transit and all-electric F-150 on the way.”