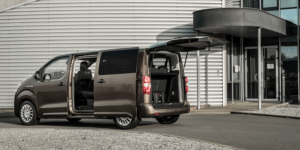 Toyota presented the Proace Verso Electric, the minibus version of the Proace Electric van. The order books are scheduled to open this month and the first deliveries in Europe are scheduled to start in March 2021. Prices and full specifications will be announced at the sales launch.

The Japanese car manufacturer is revealing further details of the passenger transporter variant of the Proace Electric. This spring, Toyota made it public that the battery-electric vehicle announced in 2019 will use the technical basis of its PSA sister models, including the Peugeot e-Expert, Citroën ë-Jumpy and also the Opel Vivaro-e with two battery options (50 and 75 kWh).

The technical data are of the PSA trio entails for the following specifications: Depending on the battery, between 230 and 330 kilometres WLTP range, and between 1,000 and 1,200 kilograms payload, depending on wheelbase and battery. The three-phase 11-kW onboard charger is also optional for Toyota; a single-phase charger with 7.4 kW is installed ex-works. The company says that the 50 kWh battery can be charged in about 30 minutes at a 100 kW charging station and the 75 kWh battery can be charged to 80 per cent in about 45 minutes. The maximum speed is 130 kph.

The series includes three lengths and four model variants and can accommodate up to nine people. The battery is installed in the underbody of the vehicle, which means that there is no loss of space in the interior. Depending on the length of the vehicle – Compact, Medium or Long – the volume with all seats in their places is 280, 640 and 1,060 litres. Toyota gives the trailer load (braked) as one tonne, analogous to the PSA trio. The same applies to the battery warranty where Toyota is offering the same warranty for eight years and 160,000 kilometres.

While the minibus will be available for order from this month and the first vehicle deliveries in Europe are expected from March 2021, the van version Proace Electric will be on sale this fall. The first vehicles are to be handed over in winter.

Kia could be planning a fully electric Sportage