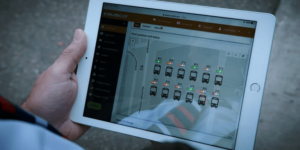 Dutch electric bus and charging infrastructure manufacturer Ebusco and Rocsys, a supplier of plug-in robots, are joining forces to automate bus depots. Their first robot automatically inserts the CCS plug of the depot charger into the electric bus for charging.

Ebusco expects to receive the first series of robots in April 2021 and wants to use them to realise a demo installation at its headquarters in Deurne in the Netherlands. A second, larger series is then planned for July 2021. In parallel, the partners are further developing the robot so that it will be able to serve several buses simultaneously in future. Ebusco and Rocsys also want to standardise further the communication between the vehicle, the charger, the robot and the higher-level systems. In this way, the entire charging process is ready for autonomous e-vehicles.

“The advantages of automating bus depots are many and varied,” says Ebusco boss Peter Bijvelds. First of all, it saves time (and time is money), but perhaps even more importantly, it eliminates the risk of a bus not being charged in the morning, because someone forgot to plug in the bus or the plug wasn’t inserted properly.”

The Dutch company believes that depot charging is more advantageous than pantograph charging and states that automation is an important addition. “The only argument we regularly hear in favour of charging via a pantograph is that nobody has to do anything manually. That argument is no longer relevant thanks to this innovative robot,” says Bijvelds. “This combination saves enormously on costs, time and permits compared to pantograph solutions.”

Following the logic of Ebusco, the latest electric bus model from the Dutch company, the Ebusco 3.0, is also designed exclusively for night-time depot charging. According to the manufacturer, the absence of a pantograph mounted on the roof of the vehicle reduces the weight of the buses, among other things. The Ebusco 3.0 will have a range of 500 kilometres. The predecessor model Ebusco 2.2. has a range of 350 kilometres.