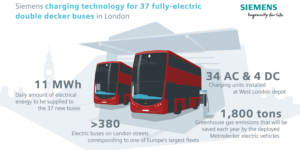 The first of the Optare Metrodecker EV electric double-decker buses ordered in February are already in service, with the rest of the fleet scheduled to follow in the next few months.

The 34 AC and four DC charging units have been installed in the Westbourne Park bus depot on the Great Western Road. Siemens says that when all 37 electric buses are in operation, the amount of energy charged will add up to eleven MWh per day.

The buses are mainly to be charged overnight with the AC22 units from Siemens, and the AC chargers are also to be used primarily during breaks in operation. If the breaks are shorter, electricity will be recharged at the four UC200 DC charging points.

In addition to the installation and commissioning of the charging infrastructure, Siemens is responsible for other tasks in the depot. A program for preventive maintenance and 24-hour technical support service was also agreed upon.

Samuel Ribeiro, Chief of Staff at Tower Transit, said: “As part of a global transport group, we are committed to delivering safe, sustainable and innovative transport solutions, which includes electric buses in Australia, and the recent establishment of the world’s first hydrogen bus consortium.”

“The work at Westbourne Park reinforces Siemens’ growing reputation as one of the world’s leading providers of electrical infrastructure and transport solutions, which are paving the way towards the electrification of the transport sector,” said Matthias Rebellius, member of the Managing Board of Siemens AG and CEO Smart Infrastructure.

The buses, called Metrodecker EV, are to be used for the electrification of lines 23 and C3. The 37 E double-decker buses are powered by the ZF AxTrax AVE electric portal axle. Siemens says that the Metrodecker buses deployed by Tower Transit will save more than 1,800 tons in greenhouse gas emissions well-to-wheel in each year of operation in comparison to a Euro VI bus.