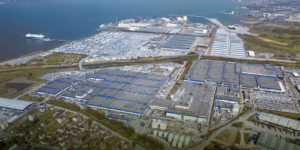 Ford Otosan, a joint venture of Turkish Koç Holding and Ford, began building a battery assembly factory for electric vehicles in Turkey. Completion is scheduled for 2022. The company produces the Ford Custom PHEV in the country and started production of the E-Transit recently.

The battery assembly factory is located in the industrial province of Kocaeli and will be part of the first integrated electric vehicle production facility in Turkey, Haydar Yenigun, Ford Otosan’s general manager said. He also described their Kocaeli plants as Ford Europe’s largest production centre for commercial vehicles.

The battery assembly will feature partial automation with 30 robots and also battery testing and a new cold metal transfer welding technology. The manager stressed the part Turkish engineering played and that they would now “develop hardware and software tests, beyond battery assembly, with our own engineering.”

Yenigün claims the joint venture to have invested 56 million in the production of electric cars to date when pointing to the Ford Custom PHEV and e-Transit. The Turkish facility assembles the entire contingent of Ford’s electrified vans with destination Europe. In the US, the company is currently converting their plants for electric vehicle production with the e-Transit to be made in Kansas City. Deliveries in Europe are set for 2022 and 2021 in Noth America.

Ford Otosan is a car manufacturer founded in the late 1950s and based in Istanbul. For decades, the company traded under the name Otosan Otomobil Sanayii before it was renamed Ford Otomotiv Sanayi A.Ş., or Ford Otosan in short, in 1997. The product range consists mainly of commercial vehicles.