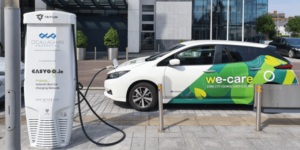 In Ireland, EV charging network provider EasyGo launched a partnership with telecoms company Eir to replace 180 public telephone booths with EV rapid charging points. Around €10 million are to be invested in the plan, and results are expected in January.

For the initiative, DC rapid charger from the Australian company Tritium will be used that can add “100 kilometres of range to an electric vehicle in less than 20 minutes”, according to the organisers.

Currently, Ireland has an EV population of around 10,000 vehicles, “which amounts to less than 0.5% of the national fleet.” These numbers will not grow unless charging infrastructure is expanded significantly. Currently, the EasyGo network comprises about 1,200 charging points. This will definitely need to scale up before the Irish planned ban on internal combustion engine sales in 2030. This also does not mark this first initiative in Ireland to convert existing infrastructure to suit the needs of a changing mobility network.

“100 kilometres of charge would cost less than €5, said Gerry Cash, Director of EasyGo, adding: “The important thing for electric vehicle driving is that people can charge at home at the night rate, but they have the comfort of knowing that they can charge when they’re out and about and return and not have that ‘range anxiety’.”

“Replacing our little-used legacy infrastructure with state-of-the-art Rapid Chargers will make the transition to electric vehicles a viable alternative for thousands of people across the country, further driving forward the decarbonisation of Ireland and helping to meet our climate targets,” Carolan Lennon, CEO of Eir said.