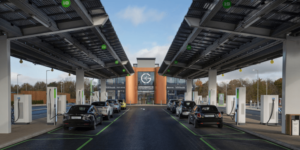 The UK’s first Electric Forecourt near Braintree, Essex, is now open for business. The site is the first of over 100 planned Electric Forecourts being built by Gridserve over the next five years, which aim to help pave the 2030 transition to an electric transport environment.

As previously reported, each of the planned 100 locations is expected to include up to 24 ultra-fast charging bays, with the batteries able to support maximum charging requirements simultaneously. The promoters go as far as to say the station will eventually be capable of handling 500 kW high power charging capacity, as well as options for buses, trucks and other commercial vehicles, aside from the varieties of electrified passenger vehicles available on the market.

Total costs for the initiative are expected to run up to £1 billion across the entire UK. The first forecourt stands adjacent to Great Notley, just off the A131, and enables 36 electric vehicles to be charged simultaneously, with high power chargers that can deliver up to 350 kW of charging power, according to the organisers. Costs for charging currently stand at only 24p per kWh of energy (including VAT); “which is currently the lowest ultra-high power charging rates on the market today – meaning a typical charge from 20% to 80% costs under £10 for an average-size electric vehicle.”

The Electric Forecourt is not only designed to charge electric vehicles, but also to entertain their drivers in the meantime: a comprehensive retail space hosting “Best of British” partners including WHSmith Travel, Costa Coffee, Booths, Post Office, and Gourmade was also installed at the location. It even goes so far to include business areas, as well as a “wellbeing area with exercise bikes that generate electricity.” Whether you’ll be discounted the generated energy from your charge was not specified.

“Today’s announcement represents a major milestone in achieving Gridserve purpose to deliver sustainable energy and move the needle on climate change,” says Toddington Harper, Founder and CEO of Gridserve. “It’s our collective responsibility to prevent greenhouse gas emissions rising further, and electric vehicles powered by clean energy represent a large part of the solution. However, charging has to be simple and free of anxiety, which is why we’ve designed our Electric Forecourts entirely around the needs of drivers, updating the traditional petrol station model for a net-zero carbon world and delivering the confidence people need to make the switch to electric transport today – a full decade ahead of the 2030 ban on petrol and diesel cars.”