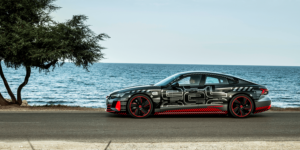 Since the e-tron and e-tron Sportback SUV models are built in Brussels, the e-tron GT is the first electric Audi to be produced in Germany. Plant manager Helmut Stettner says that series production will start on schedule despite the Corona pandemic, which is “the result of bundled competencies and strong teamwork”.

In Neckarsulm, the punctual start despite the pandemic was also made possible because a lot of work had already been initiated or completed in 2019. A separate, highly automated body shop was set up for the e-tron GT, while the R8 sports car, which is also built in the Böllinger Höfe, will continue to be produced in small quantities in a kind of manufactory.

Audi justifies the “balance sheet CO2-neutral” part of production with a series of measures: Production in Neckarsulm (including the main plant) has been powered by renewably sourced electricity since the beginning of 2020, and heat is supplied by a biogas-powered combined heat and power plant. According to Audi, it is offsetting emissions that cannot currently be avoided by renewable energy sources with so-called carbon credits from certified climate protection projects.

In addition to the greenest possible logistics to the plant, raw materials are also to be recycled within the site. Here, Audi calls an “aluminium closed loop”, in which offcuts of aluminium sheet, which are produced in the press shop at the Neckarsulm site, are to be recycled. Audi intends to use the aluminium loop to save several thousand tons of CO2 per year.

In addition, paper and packaging waste is to be largely avoided in production. Plastic waste from the assembly of the A6 and A7 series will also be used in the production of the e-tron GT. As part of a pilot project, the plastic waste produced there will be sorted by type, shredded and then processed into special fibres. These filaments are then reused in the 3D printers for production.