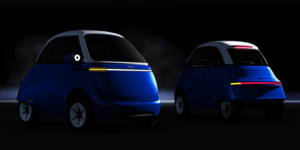 Micro Mobility Systems has just revealed new insights into developing its Microlino 2.0, a light electric vehicle or so-called bubble car. The prototype incorporates the new chassis, motor and battery and has been tested.

The Swiss company has completed the virtual integration of all technical components into their newly designed chassis and are now prototyping. In an email to our editors, the company wrote that initial tests with a prototype chassis have been promising and significantly better than the Microlino 1.0.

Work has also begun on building the first complete prototype that can also be used to test components such as lights and the folding roof. “We expect this to be ready to drive in a few weeks. We plan to have a total of five prototypes, each completed and tested in succession at intervals of a few weeks. Production will start in 2021 despite Corona,” says the Micro Mobility founding family Ouboter.

Following the out-of-court settlement announced in January 2020 with Artega and TMI in the case of the Microlino clone Karolino (now sold as Karo-Isetta), Micro Mobility Systems announced that it would, in turn, work with Italian company CECOMP to bring an enhanced version of the Microlino to production readiness. The team christened the visually and technically revised model Microlino 2.0, saying at the time that it would have “much better handling, better ergonomics, better repairability” and could be “produced in high volumes.” Following the Geneva Motor Show’s cancellation in the spring, the Swiss company unveiled the small electric car virtually in early March.

The new Microlino has said goodbye to its retro design. In March, for example, pictures showed continuous LED light bars that make the vehicle look much more modern. Micro Mobility has now revealed that the front and rear LED light bars will also make it into series production. The company says that the Microlino will be the first vehicle in the L7e category to feature this technology.

The manufacturer is also revealing new details about the interior. For example, the dashboard design shown in March will make its way into series production with the difference that a touch-screen display will replace the switches and buttons on the central bar. “This gives us more flexibility in adding new functions,” explains the company. This means that the small electric car will be given two displays, one behind the steering wheel as a speedometer and a smaller central touch display. Also new is that the gear selection is now on the left side and is controlled by a rotary knob.

We already covered other features of the Microlino 2.0 in February, so only briefly here: The chassis will in future be constructed from a mixture of sheet steel and aluminium, and the rear axle will be 50 per cent wider to allow independent wheel suspension. The steering column is fixed in the Microlino 2.0 and no longer folds forward when the door is opened. The manufacturer is also switching to NMC cells, which results in a slightly smaller battery and thus more space in the interior.

As for the powertrain, the electric motor has been changed and is now said to have noticeably more power while also being more efficient than the old version. Despite the new motor, Micro Mobility says in the spring that “the basic technical data and the range of up to 200 kilometres and the price of 12,000 euros” should not change.

On another front, Micro Mobility Systems introduces Hans-Peter Kleebinder, former head of Mini Germany and CMO of Audi Germany, as a new member of the Micro Advisory Board. According to the Swiss company, Kleebinger was the first Microlino 1.0 test driver in Germany and will now use his many years of experience in the automotive industry to support the market launch of the Microlino 2.0.