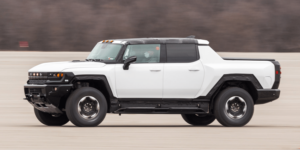 Around 10,000 pre-orders have apparently been placed for the all-electric GMC Hummer EV Edition 1 that was unveiled at the end of October. General Motors is, therefore, already considering increasing production figures.

The report comes from the Detroit Free Press concerning a virtual dealer meeting that took place last Thursday. According to a dealer who attended the meeting, the Edition 1 of the GMC Hummer EV was sold out within just ten minutes. It was said that there are already enough orders to fill the first year of production.

General Motors declined to comment on the number of pre-orders.

At launch, the fully electric Hummer had elicited ecstatic headlines in some US media outlets such as “350-mile electric super truck for $80,000 with super price tag” only this is a little misleading: the starting price for the Hummer EV Edition 1 will be $112,595. According to GM, the later base price will be 79,995 dollars, but they will introduce cheaper versions successively between 2022 and 2024 and not as a “super-truck” with three motors or a 350-mile range.

About half of the 1,900 GMC dealers in the US agreed to invest up to $140,000 to sell the electric pickup, given the high number of pre-orders. GMC is also planning other electric models, including an SUV offshoot of the Hummer EV to be unveiled in early 2021 and an all-electric version of the GMC Sierra pickup. There were rumours of an all-electric version for the GMC Sierra as early as 2019.

General Motors had only announced at the end of November that it would accelerate its transition to electric mobility with increased investments and that it intended to launch 30 purely electric models worldwide by 2025.

The Hummer EV is to be built in Detroit-Hamtramck and will be one of General Motors’ first electric cars on the new Ultium platform. GM announced its modular battery technology in March 2020, and later presented the associated motor technology called Ultium Drive.