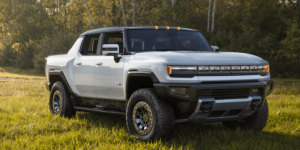 General Motors has now launched the much anticipated fully-electric Hummer pick-up truck. The GMC Hummer EV can be pre-ordered immediately and is scheduled to go into production in fall 2021, first off as Hummer EV Edition 1 with three electric motors.

Together, the three motors produce a total output of 735 kW. The GMC Hummer uses an 800-volt system that will allow DC charging with up to 350 kW. The range is given as more than 350 miles (563 kilometres).

While the fully electric Hummer has elicited ecstatic headlines in some US media outlets such as “350-mile electric super truck for $80,000 with super price tag,” this is a little misleading: the starting price for the Hummer EV Edition 1 will be $112,595. According to GM, the later base price will be 79,995 dollars, but they will introduce cheaper versions successively between 2022 and 2024 and not as a “super-truck” with three motors and not with a 350-mile range.

So far, three further versions have been announced after Edition 1: The Hummer EV 3X with three motors, over 588 kW and a range of 300 miles (482 kilometres) set to come in fall 2022 for 99,995 dollars. The Hummer EV 2X is to follow in the spring of 2023 for 89,995 dollars, featuring two electric motors (460 kW), all-wheel steering, air suspension and also 300 miles range. The Hummer EV 2 (no X) for 79,995 dollars won’t see the light of dealerships until spring 2024 – also with two motors and 460 kW, but probably with a smaller, unspecified battery. GM only states the range here as “250+ miles”, i.e. more than 402 kilometres. Since the GMC Hummer EV is not intended for European export, for the time being, we have not converted the prices here.

GM did not specify the capacity of what is likely to be three battery packs at the presentation. When charging, the current is supposed to flow into the battery for up to 100 miles (161 kilometres) in ten minutes. Still, in practice, this value must be seen in relation to the presumably high, but not yet known consumption of the Hummer EV.

The Hummer EV is to be built in Detroit-Hamtramck and will be one of General Motors’ first electric cars on the new Ultium platform. GM announced its modular battery technology in March 2020, and later presented the associated drive technology called Ultium Drive.

The design of the new electric Hummer is reminiscent of the earlier models but is more modern throughout. The very beefy basic design of the big pickup with roots in the military has been kept. The designers have also retained the former radiator grille (now with illuminated brand name lettering) as a defining element, though now this also makes access to the frunk more comfortable when the hood is opened. The designers have also thought ahead for the rear flap of the pickup loading area and integrated a fold-out step.

The interior is characterised by clear lines and robust materials with bronze-coloured design elements. The vehicle interior sports two large screens, one for the driver and the other free-standing in the middle of the dashboard.

“The GMC Hummer EV is revolutionary, defying what the industry thinks of as a pickup truck,” says Duncan Aldred, Vice President of Buick and GMC brands. “The Edition 1’s tailored off-road content will make Hummer EV’s unprecedented capability and zero-emissions a very special proposition for customers.” With its off-road capabilities, Aldred is alluding to the Hummer’s crab walk, among other things: With four-wheel steering, the wheels on the front and rear axles can be turned in the same direction, allowing the Hummer EV to move diagonally, for example, to avoid certain obstacles when driving off-road.

Whether the industry and especially the customers really consider the Hummer EV to be so revolutionary when it is delivered in autumn 2021 remains to be seen given the announced competition in this now highly contested segment. Also announced for the end of 2021 is the not exactly ordinary Tesla Cybertruck, whose three-motor version will have a range of 500 miles (800 kilometres) and will be significantly cheaper at $69,900. The startup Rivian wants to bring the R1T as a big electric pickup in 2021, Ford is also working on an electric F-150 version, and other startups such as Lordstown Motors and Nikola are also pushing the pick-ups onto the market, mostly in the US.

Update 22 October 2020: It took only 1 hour until the planned production quantity of the GMC Hummer EV Edition 1 for the first year was “sold out” in the form of reservations. However, GMC has still not revealed how many units of the battery-electric pickup truck will be built.