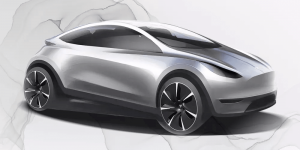 Tesla could launch a significantly cheaper model as early as next year. This is the result of new information from China, which refers to an environmental report of the Californian electric car manufacturer for the Gigafactory 3 in Shanghai.

According to the environmental report, production of a more compact model based on the Model 3 is to start at Tesla’s China plant as early as 2022, i.e. much earlier than previously assumed. This is expected to cost around 150,000 to 200,000 yuan (the equivalent of around 19,000 to 25,000 euros) and be launched on the market before the end of 2022. Several Tesla info portals, citing Chinese articles, report that the new vehicle was already approved by the Chinese authorities in September 2020 and that product verification is to be completed in March 2021.

Exactly one year ago, Elon Musk had already indicated that Tesla wanted to create a design and development center in China and develop a special model there for global sales. Shortly thereafter, the California company published a sketch on Chinese social media channels in the wake of a job offer for the center. The post showed a rendering of a previously unknown compact model alongside the Model 3 and Model S. The front features the electric carmaker’s typical design language, and beyond that, the Tesla emblem can be identified on the front hood.

Shortly before, Tesla CEO Elon Musk had hinted at the new development during the Model 3 delivery launch for regular customers in China. He spoke of a special model that would be sold worldwide and would receive a similarly unexpected design as the Cybertruck. Allegedly, the look will draw a bow to Chinese art history. However, the published sketch does not provide any clues for a spectacular look so far. Basically, it is unclear whether the new development now mentioned in the environmental report and the rendering shown in the job offer are one and the same vehicle. It would be plausible, however.

Apple in talks with Hyundai over BEV cooperation