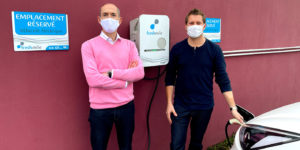 In France, charging network operator FreshMile and charging specialist Chargemap have expanded their cooperation. Until now, access to Freshmile charging stations with the Chargemap badge has been via roaming. Now, the Chargemap and Freshmile services are connected directly via the open protocol OCPI.

This eliminates the need to use a roaming platform. In total, the partnership with Freshmile gives Chargemap passport holders access to 7,000 charging points across France. The Freshmile network mainly has 22 kW charging points, but also some fast charging points.

The cooperation between the two companies dates back to 2017. Since then, the Freshmile charging network has been accessible in principle to Chargemap Pass users. “In concrete terms, by eliminating the middleman, we are in a position to offer a higher quality service and therefore improve our users’ charging experience,” Chargemap writes.

Chargemap is a charging specialist based in Alsace, France. The startup initially focused solely on connecting electric car drivers within an open community that enabled collaborative mapping of charging points. Then, in 2018, the company also launched its own access solution, allowing not only location viewing but also charging point usage. Later that year, Chargemap joined the European roaming platform e-clearing.net and announced a roaming collaboration with Hubject to provide electric car charging outside of France.