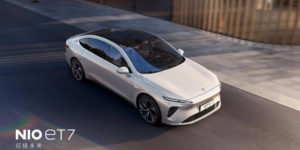 Nio has unveiled its new flagship, the ET7 electric sedan with advanced autonomous driving features. It follows the three previous electric cars ES8, ES6 and EC6 and is now available for pre-orders as a debut special edition.

There are also other options of a 70 or 100 kWh battery. Prices start at 56,600 euros. The electric all-wheel-drive sedan is to be delivered to China’s home market from the first quarter of 2022.

In total, Nio plans to offer three battery options. In addition to 70 and 100 kWh, there will also be a variant with 150 kWh capacity. Nio puts the achievable range at more than 500, 700 and 1,000 kilometres respectively, keeping in mind that this is based on the outdated and unrealistic NEDC test cycle. The other technical data is as follows: The sedan has an all-wheel-drive system that produces 480 kW and 850 Nm of torque. The engine on the front axle delivers 180 kW and the one on the rear axle 300 kW. The ET7 is said to accelerate from 0 to 100 kph in 3.9 seconds. Nio states the aerodynamic drag value as 0.23. To compare, the Tesla Model 3 comes in at 0.24.

The Chinese electric carmaker has not yet provided any information on the charging capabilities of the ET7 at the ‘NIO Day’, during which the new flagship was unveiled over the weekend. The company did, however, sketch a very detailed picture of the 5,098 mm long, 1,987 mm wide and 1,505 mm high electric car with a wheelbase of 3,060 mm. For example, the vehicle features, among other things, frameless windows, so-called independently “soft-closing doors” with retractable door handles, a smart air suspension and a braking system with components from the manufacturer Brembo. A 1.9-square-meter glass roof is designed to let plenty of light into the interior. There are also three discreet elevations in the front part of the roof that house sensors and cameras.

Visually, the resemblance to the ET Preview concept presented in Shanghai in 2019 is unmistakable. The study was designed in Munich by the BMW i design team. Inside, the cockpit boasts a minimalist design centred around a 10.2-inch instrument cluster and a 12.8-inch central display. Nio describes the smart vents as “invisible.” The ET7’s connectivity and communications capabilities include voice control, 5G and V2X communications. Both the front and rear seats have heated seats and a massage function. Nio also announces the sedan’s use of sustainable materials and a new type of sound system with 23 speakers installed in the vehicle.

During the sedan presentation, Nio devoted significant broadcast time to its sensor system, thanks to which the leap from assisted to autonomous driving should succeed. At the centre is a high-resolution lidar sensor that sits centrally on the roof position. The sensor was developed in-house and covers 120 degrees and is flanked by two other cameras on the left and right. These three are the most visible of a total of 33 elements, including cameras, radar, sensors, etc., that Nio has installed in the battery-electric car. The complete system generates up to eight gigabytes of data per second, which is processed by a new computer system on board. The manufacturer has named the entire system for autonomous driving Nio Autonomous Driving, or NAD for short.

According to Nio, the prices include all the hardware elements mentioned as standard. For the Nio Autonomous Driving system, the manufacturer is introducing a subscription that will cost 680 yuan per month, the equivalent of around 86 euros. The company is also announcing bonuses for early pre-orderers. The vehicles will be delivered on a first-come, first-served basis starting in the first quarter of 2002, according to the presentation. Regardless, owners of the ET7 could expect a free wallbox and several lifetime services (maintenance, battery replacement, free connectivity, etc.).

In the following video you can watch a replay of the presentation of the electric sedan in Chinese with English subtitles:

Update 11 January 2021: In a press release on the ET7, Nio revealed a few more details. The autonomous driving system, or NAD for short, will gradually cover use cases in the areas of highway, city, parking and battery replacement. In addition, Nio talks about solid-state battery technology, at least with regard to the 150 kWh battery. Nio says that the battery, which achieves an energy density of 360 Wh/kg, should first be available from the fourth quarter of 2022.

Nio also unveiled the next generation of its battery swap station. Electric cars could now automatically drive into the station and the battery change could be initiated from the vehicle with one click. According to the manufacturer, 312 batteries can now be changed daily. Against this backdrop, Nio announced its intention to accelerate the expansion of its network of charging stations. By the end of 2021, 500 are to be in operation nationwide in China.