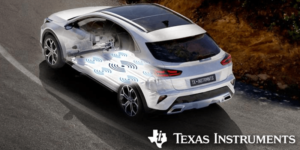 US semiconductor specialist Texas Instruments (TI) has unveiled a new battery management system that relies on a wireless communication protocol instead of cabling. According to the company, TÜV Süd from Germany has tested the solution for safety.

Battery management systems (BMS) monitor battery cells’ status, among other things, and are wired to them for this purpose. Texas Instruments points out that every electric car carries several meters and kilograms of copper cable. As an alternative to this, the Texans are now presenting a wireless BMS that works with a specially developed communication protocol and a set of electronic chips, whereby all the required data can be read out “wirelessly”. According to Texas Instruments, the advantages are that it gives manufacturers more freedom in designing their electric vehicles, eliminates a component that is susceptible to maintenance with cables, and makes electric cars lighter.

According to Texas Instruments, the solution can capture data from nearly 100 cells within milliseconds – and doing so very accurately (with a maximum deviation of two millivolts) and an extremely low error rate. The chips also operate on a very low power basis. This is necessary to prevent the car from discharging when parked, according to the developer. Another feature of the wireless BMS cited by the company is its transferability to multiple vehicle platforms. Texas Instruments says that when implementing a battery module, configurations with 32, 48 or 60 cells are feasible. The safety of the system has been confirmed by the independent testing service provider TÜV Süd in Germany.