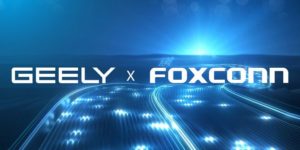 Long-time Apple supplier Foxconn and Chinese automaker Geely are entering into a partnership. With the planned joint venture, in which both partners will each hold half of the shares, Geely and Foxconn intend to offer contract manufacturing and consulting services in electric mobility.

The two new partners have big goals: According to Foxconn, the joint venture will “revolutionise the model of the automotive industry.” The information and communication technology is supposed to help automakers “accelerate their transition to new innovative and efficient manufacturing processes and business models based on CASE (Connected, Autonomous, Shared, and Electrified) technologies.”

The two companies will each hold a 50 per cent stake in the joint venture, while Foxconn will have a majority on the board: The Taiwanese company will fill three positions on the five-member board (including the CEO), while Geely adds only two board members. Geely Chairman Li Shufu also attended the contract signing ceremony, which was held digitally.

Young-way Liu, chairman of Foxconn Technology Group, calls the alliance a “milestone in cooperation between the automotive industry and the ICT industry.” He said the partnership will enable the company to better serve the diverse needs of different customers. “The current global automotive industry is undergoing profound changes,” adds Daniel Donghui Li, CEO of Zhejiang Geely Holding Group. “We must actively embrace change, build alliances, and synergise resources to create greater value for our users.”

Specific projects or customers have not yet been mentioned, so it is still not clear whether Geely will bring its SEA platform to the table. When it was unveiled in September 2020, the company said that it would be made available to other automakers. Contract manufacturing at an established company, with or without the SEA platform, could indeed make it easier for smaller carmakers and startups to make the step from the prototype stage to series production.

For both companies, this is not the first cooperation with a company from the other industry: Foxconn only entered into a partnership with Byton in January to get series production of the M-Byte up and running. The plan is now to start production in early 2022. Conversely, Geely is working with the technology group Baidu. Both companies want to jointly develop and build electric cars for Baidu based on the SEA platform.