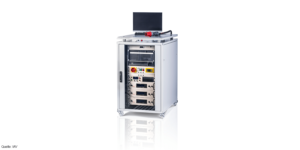 The Berlin-based engineering specialist IAV has developed a mobile high-voltage test stand that it now offers either as a product or a service. The company says that several German vehicle manufacturers are already using the unit called IAV Auros.

The mobile test stand on the scale of a compact showcase weighs 250 kilograms and, according to IAV, is significantly less expensive to purchase and operate than conventional and stationary test facilities while offering the same level of performance. The company has not yet revealed prices for the movable test bench.

While based in Berlin, the engineering service also maintains a test centre for electromobility in Chemnitz/Stollberg in the German region of Saxony. “The know-how gained from thousands of hours of testing at our site and feedback from our customers has been incorporated into IAV Auros, our first stand-alone product in this field,” says Erik Schneider, Head of E-Traction & Hybrid Systems at IAV.

IAV says that the demand for test benches for electric cars is high. “Test bench times are rare and relatively expensive due to the high demand. With IAV Auros, we are resolving this tension and creating urgently needed capacity,” the company explains. The solution is powerful, mobile and flexible, and it is also suitable for international tests and trials. It can be integrated into practically all rooms with a voltage supply of 63 amps, according to IAV. The mobile test bench can control and monitor one or two electric motors in so-called back-to-back operation and electrical components and systems such as onboard chargers and e-turbochargers. “In conjunction with IAV Auros, these tests can also be completed on test benches for climate, environmental and durability testing that previously had no power supply for electromobility components,” IAV says. Software developed in-house allows all test parameters to be specified and automates all test tasks.

With more than 8,000 employees, IAV is one of the major engineering service providers in the automotive industry. Headquartered in Berlin, the company turned over more than €1 billion in 2019. According to the company, its customers include “all well-known automotive manufacturers and suppliers.” In addition to development centres in Berlin, Gifhorn and Chemnitz/Stollberg, IAV has other German locations in Munich, Sindelfingen, and Ingolstadt.