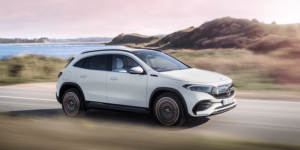 Mercedes-Benz Cars just presented the EQA, an all-electric compact e-SUV. Further variants are to follow the 140 kW EQ electric car now revealed. The EQA 250 will be available for order in Germany from February at prices starting at 47,540 euros.

Mercedes is calling the EQA an “excellent compromise between performance, cost and time-to-market.” As a close relative of the GLA, the first all-electric Mercedes compact car brings “all the inspiring features of that vehicle and combines them with an efficient electric drive.”

With the asynchronous machine mounted on the front axle, the 140 kW corresponds to the rated power, and the peak power is higher. The torque of 375 Nm is sent to the front wheels via an input spur gearbox. With the one electric motor, the EQA 250 is said to accelerate to 100 km/h in 8.9 seconds, with a top speed of 160 km/h.

The maximum recuperation power is given as 140 kW. Here, however, a so-called ECO Assistant is to support and specifically control functions such as sailing and recuperation. Depending on the battery’s state of charge and the traffic situation, the system determines whether the vehicle cruises better when the pedals are released or recovers energy and decelerates in the process. As in the EQC, the driver can also select the recuperation power manually in five stages via the shift paddles on the steering wheel.

Later, “even more athletic all-wheel-drive models” with a second electric motor on the rear axle and outputs of more than 200 kW should follow. The second electric motor is not to be another ASM but a more compact permanent magnet synchronous motor. In the models that are to bear the traditional 4MATIC designation, most of the drive power will come from the rear motor. Simultaneously, the asynchronous machine on the front axle will generate only low drag losses in part-load operation. However, the computer is said to redistribute the power demand between the front and rear axles up to 100 times per second, depending on the driving situation.

A version with a range of more than 500 kilometres according to WLTP is also planned, but the German carmaker has not yet revealed further details. Here, Mercedes-EQ sees “the key to long ranges not in ever-larger batteries, but a consistent increase in the efficiency of all vehicle components.”

With its 200 cells arranged in five modules, the current battery amounts to the usable energy content of 66.5 kWh. With the standard 11-kW AC charger, the battery is said to be charged from 10 to 100 per cent in 5:45 hours. With the maximum DC charging power of 100 kW, Mercedes gives charging time from 10 to 80 per cent as 30 minutes. This charge stroke equates to 46.55 kWh, which with the stated charge duration gives an average charge power of 93 kW – so the EQA can probably keep the charge power close to 100 kW over a wide range, it doesn’t seem to be just a short power peak at low charge levels.

The EQA itself is 4.46 meters long, 1.83 meters wide and 1.62 meters high. Mercedes gives the wheelbase as 2.729 meters, which is the same as the GLA. The trunk holds between 340 litres in the standard configuration and 1,320 litres with the rear seatbacks folded down. However, the payload of the 2.04-ton EQA is a manageable 430 kilograms for a five-seater.

Aerodynamics developed on the computer, heat pump as standard

The efficiency mentioned at the beginning of this article also includes ensuring that the customer reaches his destination as quickly as possible. With what Mercedes calls Electric Intelligence, the navigation system is designed to calculate the fastest route, taking charging times into account. To do this, the range is constantly simulated, necessary charging stops are taken into account, and factors such as topography, weather, traffic and changes in driving behaviour are also taken into account.

Other factors are more important for the overall efficiency of the car, such as air resistance. According to the Mercedes-Benz, the aerodynamics development took place digitally – after all, basic factors were predetermined by the GLA. Nevertheless, EQA-specific parts were developed, such as the closed-top radiator grille, the flow-optimised front and rear aprons and the smooth, almost completely closed underbody or the aero rims. Mercedes gives the cW value (later measured in the wind tunnel) as 0.28, and the frontal area is 2.47 square meters.

A heat pump integrated into the thermal management system is also installed ex-works. The EQA can also be pre-conditioned via MBUX or the “Mercedes me” app, which is standard for BEVs and PHEVs.

To “meet the high standards of noise and vibration comfort typical of the brand,” the drive system has been consistently decoupled from the chassis and body, among other things. Only test drives will show what this and the numerous insulation measures achieve in practice.

The EQA adopts numerous design details from the EQC in the interior, such as the rose gold-coloured accents in the air vents, seats and vehicle key. The EQA is said to feature comfortable seats, a rearview camera, and the MBUX navigation system from the factory. Besides, 18-inch alloy wheels, LED headlights and a power-opening and closing tailgate are standard.

A trailer hitch is available as an optional extra. The towing capacity is 750 kilograms with and without brakes, and the drawbar load is 80 kilograms. The all-wheel-drive models to come later are to offer a higher towing capacity, but this is not yet quantified.

Mercedes quotes 47,540.50 euros as the base price for the EQA 250 in Germany. According to the carmaker, the model should be available to order starting in the spring, and according to Mercedes internal documents, sales will start on 4 February. With a netlist price of 38,507 euros, at least this version of the EQA will be eligible for the full environmental bonus and innovation premium in Germany. This brings the entry-level price in Germany down to under 38,000 euros – and thus to the level of a significantly less well-equipped GLA 200 with a 120-kW gasoline engine.

There were no further comments on actual start of sales to it remains to be seen when the electric Mercedes will materialise in North America. The e-SUV will be made in Europe and China.