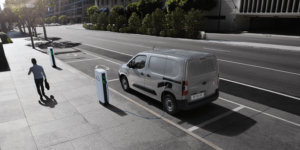 Peugeot has unveiled the new e-Partner electric van, completing commercial vehicles’ trio from the PSA brands. The fully-electric high-roof delivery van will be launched in two lengths and will be available for order from autumn 2021.

PSA usually releases a version from each of its brands for each model. In the e-Partner from Peugeot, the corresponding versions from other PSA brands are the Citroën ë-Berlingo and the Opel/Vauxhall Combo-e Cargo. This was also the case with the larger e-commercial vehicles with the trio ë-Jumpy, Vivaro-e and e-Expert.

Like its two PSA siblings, the e-Partner features the familiar 100 kW e-drive and the 50 kWh battery. The optional 75 kWh battery of the e-Expert is not offered in the e-Partner. The delivery van’s range is up to 275 kilometres according to WLTP, although this is a provisional value as the vehicle has not yet been homologated.

According to Peugeot, almost 80 per cent of commercial vehicle drivers cover less than 200 kilometres per day on average, which is why Peugeot considered an electric version of the Peugeot Partner an obvious choice.

The e-Partner is delivered from the factory with a three-phase 11 kW onboard charger. The charging time at an appropriate wall box or charging station is then five hours. With 7.4 kW it is 7.5 hours. At a DC fast charging station, the e-Partner can charge up to 100 kW, filling the battery to 80 per cent in 30 minutes.

The e-Partner is offered in standard and long lengths. The standard version is 4.40 metres long and has a load space of 3.8 cubic metres. The long version is 4.75 metres long and has a 4.4 cubic metres load space – the wheelbase is also longer here. This version is also available with a double cab and five seats; the standard version has only one row of seats with three seats. According to Peugeot’s announcement, the payload is up to 800 kilograms, with an additional towing capacity of up to 750 kilograms possible.

Peugeot will offer the e-Partner in two equipment levels, called ‘Pro’ and ‘Premium’. There will also be two special versions. ‘Grip’ is aimed at commercial customers who often drive on poorly accessible terrain and transport heavy or long loads. The ‘Asphalt’ version is tailored to the needs of frequent drivers.

Peugeot has not yet announced the prices. In the press release, however, the French company says that the e-Partner should be equivalent to a combustion engine in TCO. Peugeot reckons with about 50 per cent fewer maintenance costs over 48 months and up to 70 per cent fewer energy costs.

The new e-Partner will be sold in Europe in the second half of 2021, and it is produced in Spain in Vigo.