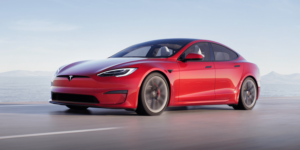 Staying on the inside, the central touchscreen is now horizontal like in the Tesla Model 3 and Y, and passengers find a screen in the second row. Very reduced controls match the steering wheel. Tesla describes the layout as “The ultimate focus on driving: no stalks, no shifting.”

Tesla is not the first carmaker to do without steering column levers. For example, Ferrari has also covered all functions in some of its sports cars with buttons on the steering wheel. Tesla’s motivation is not from racing though but from automation. Tesla has moved the selector lever from the steering wheel to a more distant position because the driver is no longer supposed to select the drive level himself – instead, the car takes over. Coupled with the sensors’ information, artificial intelligence is supposed to decide whether the driver is more likely to drive forward or backwards. Tesla gives an example: if the vehicle detects the garage door directly in front, it will automatically engage reverse gear when the driver steps on the brake.

With Autopilot, the AI will take over more and more of the driver’s tasks, probably including blinking. It would be unnecessary to install extra hardware switches on the steering wheel for this – as Ferrari did – because the backlit touch surfaces blend into the design much more inconspicuously. One difference to Ferrari: While the Italians have placed the turn signal buttons to be operated with the right or left thumb, Tesla has placed the turn signals for both directions near the left thumb.

While the interior update is the most significant at first glance, Tesla has also updated the Model S and Model X under the hood and changed its configurations. Both electric cars now not only have the Plaid drive announced in September, although it replaces the Performance version. Tesla also offers configurations that feature the drive technology from the Model 3 and Y. During the earnings call last night, CEO Elon Musk said Model S and Model X would stay with the old 18650 cell format but that it had been improved. Both models now have a heat pump as well.

The premium trim Plaid + offers a range of over 520 miles, the equivalent of 837 kilometres. The top speed is said to be 200 mph or 322 km/h, and the Model S Plaid is said to offer the fastest acceleration to 60 mph and the quarter-mile.

The Model S Long Range is still available and now gets 412 miles of range, which reduces to 390 miles in the higher performance ‘Plaid’ version. These versions have three electric motors instead of two, delivering a total peak output of 761 kW.

There is no Plaid+ version for the Model X. Even though Elon Musk states that the Model S will continue to use revised 18650 cells, we expect that the top model Plaid+ will be the first Tesla to have the new 4680 cells – the difference in range to the Plaid model without “+” is too big.

Tesla confirmed that the new Model S would start being produced “in Q1” without giving an exact timeline for deliveries.

Ford to make Mustang Mach-E with Changan in China