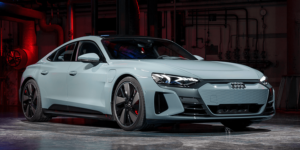 ++ The article has been updated as below. ++

Audi presents the top of its e-tron line as the company launches the e-tron GT and its high-performance version RS e-tron GT, so say Hello to the new electric Gran Turismo. It is essentially Audi’s version of the Porsche Taycan but the brand deviates from its premium tech donor on numerous points.

When it comes to the powertrain, the Volkswagen Group brand has clearly taken its cue from the Taycan. After all, the e-tron GT shares the J1 platform from Porsche also making it the first electric car from Audi with a flat-floor architecture. The 800-volt battery has a gross energy content of 93.4 kWh which comes down to 85 kWh net. As with the Taycan, the DC charging power is up to 270 kW. Audi does not mention the smaller 79 kWh battery Porsche offers as an option.

Audi also relies on permanently excited synchronous motors. The electric motor on the rear axle is fitted with the two-speed transmission familiar from the Taycan. The car always starts in second gear. Only when the driver accelerates hard or activates Launch Control does the e-tron GT shift into the shorter-ratio first gear.

Audi deviates from the e-sports car from Zuffenhausen when it comes to the electric motors’ performance spec – the focus is not on the last kW of top performance, but on the overall character of the car. The Taycan wants to be a sports car suitable for travelling, whereas Audi wants to position the e-tron GT as a Gran Turismo with a real sporty spirit. The e-tron GT quattro specified 350 kW, with Launch Control 390 kW should be possible for a short time – the Taycan 4S with the large battery comes to 360 or 420 kW here. The RS e-tron GT is rated at 440 kW, with 475 kW possible with Launch Control. As a reminder: Both the Taycan Turbo and Turbo S come to 460 kW, in Overboost Porsche specifies up to 500 and 560 kW, respectively.

Audi wants to score points for this with the range and claims 488 kilometres for the GT in WLTP, but there is no final value yet. The comparable Taycan 4S comes in at 463 kilometres. There are two explanations for this: Firstly, Porsche only states a usable energy content of 83.7 kWh. Secondly, Audi emphasised aerodynamics during development. The cW value is 0.24. The closed underbody of the battery, the diffuser, the multi-stage extendable rear spoiler and actively switchable air intakes for brakes and radiator are supposed to further improve aerodynamics.

There is also an important difference in recuperation: While Porsche has deliberately decided that the Taycan should sail in thrust mode (mild recuperation can be activated at the push of a button), the driver in the e-tron GT can select the recuperation level via steering wheel paddles. When recuperating (also via the brake pedal), an e-tron GT can charge the battery with up to 265 kW.

In terms of design, Audi has given the e-tron GT its typical branding but developed it somewhat further. The large single-frame radiator grille at the front is now only hinted at and emphasized by the paintwork – but the actual cooling surface is significantly smaller. In addition to the Audi-typical LED headlights (also with laser light for an additional charge), the Audi taillights stand out as clear differences to the Taycan. However, the e-tron GT has adopted the Porsche’s slowly sloping roofline – with the corresponding consequences for headroom in the rear seats. Since Audi has also adopted the Taycan’s “foot garages,” rear-seat passengers should still be able to sit comfortably in the e-tron GT.

The focus as a comfortable touring car is also clear from another value: With 405 litres, the trunk in the Audi is larger than in the Porsche (366 litres). The front trunk (frunk) also has a slightly larger capacity of 85 litres.

Audi’s e-tron inherits one of the most important features for a good long-distance electric car from the Taycan: DC charging power. In our recent test of the Taycan 4S over 1,700 kilometres, the charging system was fully convincing – in some cases, the car was ready for the onward journey faster than the driver. The DC charging port is located on the passenger side like in the Taycan, but differently than in the e-SUV e-tron quattro; an additional AC port is installed on the driver’s side. The AC charging power is 11 kW ex-works, “shortly after the market launch” Audi also wants to offer an option to 22 kW.

However, the biggest difference to the Taycan is probably in the interior. While Porsche has taken a new approach here with its curved speedometer display and the second large touchscreen in the centre console, the Audi comes across a bit more conventional here. The speedometer display (12.3 inches) is not curved and is installed under a hood. Also the upper navigation display (10.1 inches) and the climate control feature as a flat centre console. The climate control in the e-tron GT has physical buttons. Ex-works, the e-tron GT has a heat pump and the option of preconditioning the interior via app. The optional “comfort parking climate control” also includes the seats, the exterior mirrors and the rear window.

Audi offers numerous options for both the interior and exterior, as well as for the technology. For example, customers can choose between three different headlights (LED, LED_Matrix and LED-Matrix with laser light) or between three different brakes – steel, tungsten carbide-coated and carbon-fibre ceramic. The standard roof made of heat-insulating glass can be replaced by a lighter carbon-fibre roof if desired. There is also a choice of three versions for the front seats – sport seats, sport seats plus with 14-way adjustment and sport seats plus with 18-way adjustment. The air suspension is optional on the e-tron GT, but standard on the RS e-tron GT. The list could go on.

The two versions of the e-tron GT are built at the Böllinger Höfe plant in Neckarsulm and will be Audi’s first electric car made in Germany. They have already expanded the small-series production facility there and retrofitted it for its new task.

Both versions should be available to order in spring 2021 with deliveries set to start in summer. The base price in Audi’s home market Germany is 99,800 euros for the e-tron GT. The RS e-tron GT will cost at least 138,200 euros. In the UK, Audi is taking registrations of interest online.

Update 10 February 2021: The German automotive news site Kfz-Betrieb has published more information on the planned number of units of the e-tron GT: “Audi does not want to produce 10,000 units per year in the Böllinger Höfe in Neckarsulm. However, Audi emphasised that it would be in a position to increase production if there was sufficient demand. The manufacturer has set its sights on the USA as the largest market for the model. Around 50 per cent of all models are to go to the States. A quarter is planned for Europe,” says the article. According to a letter from the manufacturer to Audi dealers, which was made available to Kfz-Betrieb, there will be a special model at the launch. This special edition is limited to 100 units worldwide and 25 copies are planned for the German market.

Update 16 June 2021: In the U.S., the 2022 Audi e-tron GT will come with three years of complimentary DC fast charging sessions through the Electrify America network at speeds up to 270 kW. With DC fast charging the e-tron GT can be charged from 5-80% (approximately 180 miles) in about 22 minutes.

Among other things, the offer means customers can additionally choose to make use of Qmerit’s concierge service and can schedule customized home installation services for Electrify Home’s HomeStation and assist a customer with purchasing a HomeStation charger.

Update 14 July 2021: Audi is officially launching the e-tron GT electric car in the US with a starting price of $99,900 before incentives. The manufacturer added that the technical specifications have not changed from the European version: “Effortlessly propelling the 2022 Audi e-tron GT are the dual motors, producing 469 horsepower, or up to 522 horsepower in overboost with launch control, and 464 lb-ft of torque (472 lb-ft with overboost). This allows the e-tron GT to repeatedly accelerate from 0-60 mph in 3.9 seconds on the way to a top track speed of 152 mph.”

While the technical specifications remain, the US version of the e-tron GT does have cosmetic differences to their European counterparts: The US versions will feature standard 20-inch 5-double-spoke alloy wheels with gray accents; vehicles equipped with the performance package have 20-inch 5-double-spoke alloy wheels with black accents, and finally, the RS e-tron GT comes with standard 20-inch 5-spoke sustainably manufactured AERO wheels or available 21-inch wheels.