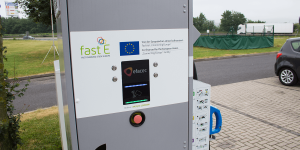 In Germany, the Dutch charging infrastructure specialist Allego has started to increase the charging capacity from 50 to 150 kW at 40 fast-charging locations built as part of the EU Fast-E project. In selected locations, 300 kW fast chargers will also be installed.

The upgrade will be applied at sites near major cities such as Berlin, Munich and Frankfurt, as well as along major motorways such as in the Ruhr area. Since most of the locations are designed for higher power, Allego expects that the network can be upgraded quickly. According to the company, the overhaul of all 40 locations should be completed by the end of this year.

In 2015, Allego launched Fast-E, an EU-funded project to build a fast-charging network for electric vehicles in Germany and Belgium. The result was the installation of 241 fast-charging stations across Germany and 37 stations in Belgium. To date, the multi-fast chargers installed by Allego are equipped with three plug types – CCS, CHAdeMO and Type 2 – and allow two vehicles to be charged simultaneously. Back in 2016, it was said that 40 locations would be equipped with transformers for later upgrading to higher charging capacities.

So now this upgrade programme is underway. The tripling of the charging capacity requires the installation of new charging equipment. Allego says that each charging station will be equipped with two connections that can be used simultaneously. This means that one type of plug will inevitably be eliminated per station. When asked by our German colleagues at electrive.net, the charging infrastructure specialist clarified that one of the two connections will have a CCS plug beyond which it will be decided at each location which additional plug type will be added. According to Allego, the decision will be based on current usage patterns and market developments. Allego has not yet revealed or perhaps decided where the 300 kW fast chargers will be installed.