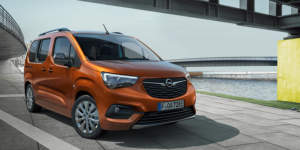 Opel now presents the electric passenger van Combo-e Life, which will be available from autumn in versions with five or seven seats.  In the UK Combo-e Life is marketed by Vauxhall.

+ + This article has been updated. Kindly continue reading our update below + +

After the Combo-e Cargo battery-electric high-roof van, this model is the passenger version and comes in a short or XL length of 4.40 or 4.75 metres and with five or seven seats. Opel presents Combo-e Life as an all-rounder vehicle well-suited for families and taxi companies, for example. The electric vehicle can be ordered with one or two sliding doors and, as the cargo version, offers a towing capacity of up to 750 kilograms.

With all seats on board, the five-passenger version has a minimum load volume of 597 litres; in the long-wheelbase Combo-e Life, the minimum luggage volume is 850 litres. With the rear seats folded down, space is increased to up to 2,126 litres (short version) or 2,693 litres (XL). In the rear, buyers also have the choice between a standard bench seat that can be divided in a 60:40 ratio or, alternatively, three individual seats, each with fold-down backrests.

Like the Cargo variant, the Combo-e Life, which can reach speeds of up to 130 kph, is equipped with the familiar 100 kW electric drive and a 50 kWh battery, which enables a WLTP range of up to 280 kilometres. Opel’s electric newcomer also corresponds to the familiar e-CMP models when it comes to charging: At a DC charging station with 100 kW or more, the battery is 80 per cent charged in 30 minutes; in Germany and elsewhere, the Combo-e Life comes with a three-phase 11-kW AC charger. The charging time is then five hours.

As an option, the Combo-e Life comes with a panoramic roof with an integrated electric sunshade. As a plus regarding equipment, Vauxhall mentions a centrally running roof gallery with standard LED lighting and a 36-litre box that hangs from the roof above the luggage compartment cover and creates additional storage space without impairing the view to the rear.

In terms of assistance systems, the Combo-e Life has the same features as the petrol and diesel-powered versions. The German company based in Rüsselsheim lists, among other things, hill descent and lane departure assistant, drowsiness and traffic sign recognition as well as a front collision warning system with automatic hazard braking and pedestrian detection. Also on offer is a 180-degree panoramic reversing camera and the IntelliGrip adaptive traction system. In terms of connectivity tools, the high-roof van has the Multimedia Radio and Multimedia Navi Pro infotainment systems; Apple CarPlay and Android Auto can also be integrated.

The purely electric high-roof van is one step below the Zafira-e Life, which is the passenger car version of the Vivaro-e. The manufacturer has not yet announced prices.

Update 17 May 2021: Vauxhall has announced pricing and specification for the new Combo-e Life in the UK. The Vauxhall Combo-e Life is available to order now, with prices starting from £31,610 on-the-road including the Plug-in Car Grant of £2,500.

In terms of technical specifications, the Combo-e Life still features a 50kWh lithium-ion battery and a 100kW (136PS) electric motor producing 260Nm of torque. The range is estimated at up to 174 miles according to WLTP. Charging can be done with up to 100kW rapid charging, which reaches around 80% charge in 30 minutes. A single-phase 7.4kW on-board charger is on board as a standard, with an optional three-phase 11kW charger also available.

Several different layouts are also available for the Combo-e Life, which is available exclusively in SE trim. The two sizes include a Medium and a longer XL variant. Medium models can be specified in either five- or seven-seat configurations, while XL vehicles are always offered with seven seats.