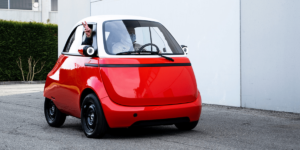 Micro Mobility Systems has announced that the first prototype of the Microlino 2.0 has been built and is now being tested. Homologation and EU road approval are to be completed in August this year and production will start shortly afterwards in September.

Then the first Microlinos can be delivered. The goal is to ramp up production as quickly as possible without sacrificing quality, the Swiss company said in a statement. The company is very satisfied with the first impressions. “Already now we can say that the driving behaviour has improved extremely to the Microlino 1.0,” Merlin Ouboter, CMO of Mocrolino AG, writes in a blog entry.

In the previous update in December 2020, Microlino had announced a total of five prototypes. Through the latest prototypes, the company has maintained the same data of roughly 200 km range and price of around 12,000 euros. The current vehicle focuses on functional tests with the chassis and body – features such as the continuous LED bar at the front are still missing from the vehicle. “These features will be built into the next prototypes step by step,” says Ouboter. He refers to the self-supporting body made of pressed steel and aluminium parts of the Microlino 2.0. Version 1.0 was basically still based on a chassis with a tubular frame.


Another prototype is to follow in March 2021, and a third around April or May. With this prototype, Microlino wants to conclude the prototype phase, as a timetable that has now been published shows. Prototypes 4 and 5, which are to be pre-series models, are to follow in June. The company then wants to start the homologation process with these vehicles. As mentioned, EU approval is targeted for August, so that the vehicle can be built and delivered from September. A launch event, during which the configurator will also be opened, is to take place before homologation in the summer.

According to Microlino, the first tools will already be manufactured in the prototype phase, and the body panels are mentioned as an example. The Swiss company wants to “lose as little time as possible”. Parallel to the homologation tests, for which Microlino estimates 2-3 months, the construction of the pre-series vehicles is all ready to begin.

Following the out-of-court settlement announced in January 2020 with Artega and TMI in the case of the Microlino clone Karolino (now sold as the Karo-Isetta), Micro Mobility announced that it would in turn work with the Italian company CECOMP to bring an enhanced version of the Microlino to series production. The team named the visually and technically revised model Microlino 2.0, which, according to Merlin Ouboter at the time, should have “much better handling, better ergonomics, better repairability” and also be “producible in large numbers”. After the cancellation of the Geneva Motor Show in spring, the Swiss company gave a virtual presentation the small electric car at the beginning of March last year.

Ein Kommentar zu “Microlino production to kick off in September”