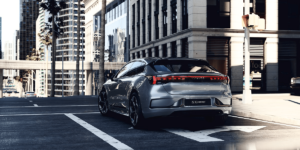 The Chinese car manufacturer Geely reportedly wants to spin off product planning, marketing and sales of electric vehicles into an independent company. The subsidiary Lingling Technologies, which is yet to be founded, is to be primarily concerned with development, marketing and sales.

As Reuters reports, the main focus will be on future electric cars based on the SEA (Sustainable Experience Architecture) electric platform unveiled in September 2020. Management has recognised the need to develop, market and sell electric cars differently from internal combustion vehicles and has therefore decided to set up a separate company, the news agency said. Geely declined to comment.

Lingling Technologies (the name is not fully finalised at this point) is to primarily manage the SEA-based models and also take over marketing and sales of the SEA models of Geely’s Lynk & Co and Geometry brands. The new company will also be involved in the further development of the SEA platform. Lingling is to “conduct research independently of conventional vehicle departments”, according to Reuters. In addition, Lingling is to obtain market data in order to develop EV models accordingly.

For sales, there is to be a dedicated sales team, with its own showrooms in city centres. Some of these will apparently be managed by the company itself, others will be operated in cooperation with dealers. However, it is not yet clear when exactly the company is to start. Reuters only writes that Geely wants to establish the subsidiary “this year”.

Geely had announced numerous cooperations in recent months to expand its EV business and SEA platform. The Chinese company aims to become a leading electric car maker, including as a contract manufacturer.

One of these joint ventures was announced with the technology group Baidu. Meanwhile, it also seems certain who will lead this electric car joint venture: According to insiders, it will be Xia Yiping, the former founder and chief technology officer of the bicycle rental company Mobike.