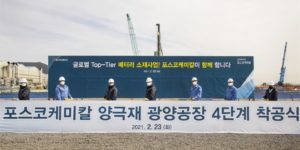 The Korean company Posco Chemical has announced that it will invest 275.8 billion won (about 204 million euros) to further increase its production capacities for cathode materials for use in electric car batteries. Plants in China and Europe are probably also conceivable in the future.

Posco Chemical, a subsidiary of the South Korean steel producer Posco, specifically wants to increase the output of the factory in Gwangyang to 100,000 tonnes by 2023. That should be enough for about 1.1 million electric cars with 60-kWh batteries. The ground has already been broken for the expansion in Gwangyang, located about 400 kilometres south of the capital Seoul.

Currently, Posco Chemical has annual production capacities for cathode materials of 30,000 tonnes and 10,000 tonnes at its Gwangyang and Gumi plants, respectively. With 100,000 tonnes from Gwangyang, production there would more than triple under the new plans. Expansion plans for the smaller plant in Gumi are not mentioned in the report by the South Korean Yonhap News Agency.

Instead, plants abroad are apparently planned. Posco Chemical is planning to set up plants in China and Europe to supply cathode manufacturers of electric vehicles with cathodes in time, according to the report. However, details on capacities or possible locations are not mentioned.