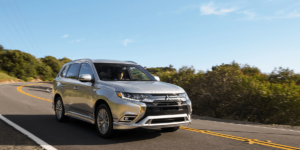 The Outlander PHEV was substantially upgraded for 2021, and features a significantly revised powertrain, an enlarged battery pack offering extended all-electric range, and increased performance from a new, more efficient, 2.4 liter inline-four cylinder engine and a higher-output rear electric motor. The combustion engine delivers 126 hp or 148 lb.-ft. of torque, combined with a 70 kW rear-axle-motor. That is 10 kW more than the 2020 model year’s powertrain. Combined, the new total system output now stands at 221 hp, marking a 31 hp increase from last year. The 2021 Outlander PHEV is already available at Mitsubishi dealers now.

Releasing more plug-in hybrid vehicles is a major part of Mitsubishi’s electrification strategy, which states that Mitsubishi aims for a 50 per cent sales margin of hybrid vehicles to their total vehicle sales by 2030. It figures in to a larger strategy among the three partners Mitsubishi-Renault-Nissan, who are each planning on focusing on specific markets and vehicle portfolios to play to their respective strengths, and split up the EV market between them, rather than competing for the same sales.

A few days ago, Mitsubishi had already presented the 2022 Outlander, but without any information about the PHEV. It is expected that additional models will follow, much like the 2019 model year of the Outlander PHEV, which also was released as a commercial vehicle. Whether the charging deal struck with Ovo for the 2020 release of the Outlander PHEV still applies is also questionable.